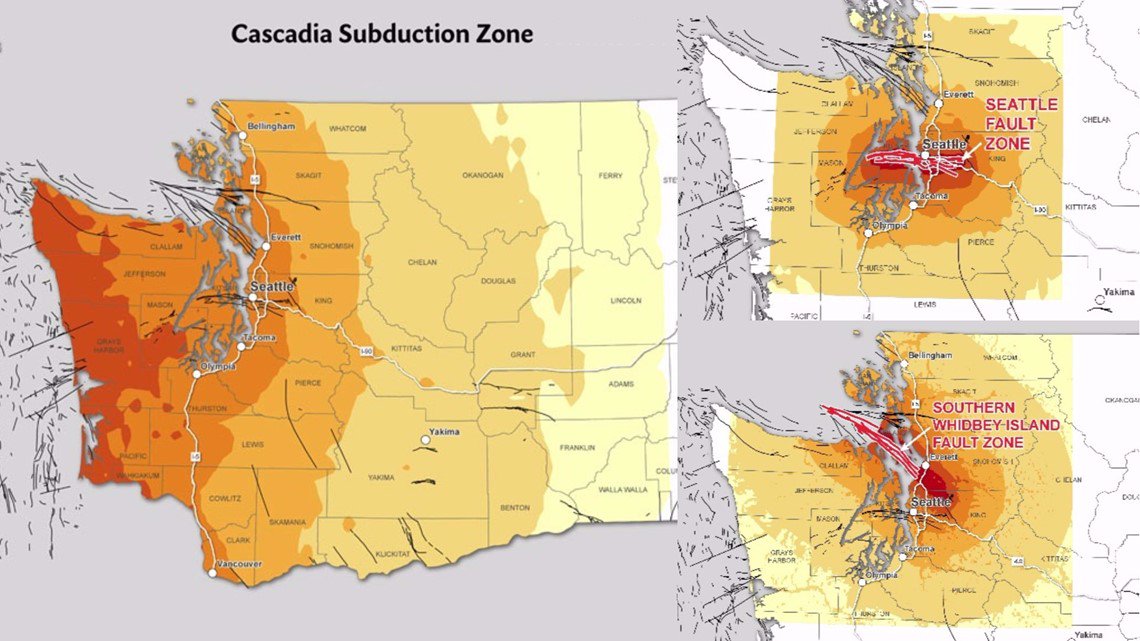 
The western half of Washington state is considered earthquake country, with the potential for very large quakes.

Scientists have their top three: The Cascadia Subduction Zone, the Seattle Fault and the South Whidbey Island Fault

While the seismic activity seems to increase in that area, it is worth coming back on the three major earthquake faults that could affect this portion of the Pacific Northwest dangerously:

The Cascadia Subduction Zone is a giant fault running from Cape Mendocino, Calif. past Oregon and Washington and doesn’t end until it’s north of Vancouver Island in Canada.

You saw its potential in the 9.1 magnitude Tohuku earthquake and tsunami that hit northeastern Japan in March 2011. Tohoku killed nearly 16,000 people; most died as a result of drowning or being crushed in the tsunami.

Because Japan was so well prepared, most retrofitted buildings outside of the tsunami zone survived. This part of the Japanese coast had not seen this type of seismic rupture in some 800 years, and what failed was that walls built to keep tsunami waves were not high enough.

In Washington, we do not have tsunami walls. Along the coast residents may have between 20 and 30 minutes to get to higher ground. The Westport area is now the first in North America to have a community vertical evacuation structure, a building strong enough to resist earthquake and tsunami wave forces and give people a platform above the expected wave heights. That place is the Ocosta School.

But the Cascadia Subduction Zone isn’t just a fault; it’s an overlapping joint between tectonic plates, parts of the Earth’s crust that float on layers of molten rock.

There’s a reason the lands around the Pacific Ocean are called the “Ring of Fire.” The earthquakes, tsunamis, and the proximity of volcanos are all part of the same system.

The coast is now the home of one of the state’s largest network of warning sirens called All Hazard Alert Broadcast (AHABs). But Forson says you also need to know what to do when the shaking happens.

There are also tsunami evacuation signs on the highways. Westport currently is the only location with a vertical evacuation structure designed for a tsunami.

“We do not encourage people to evacuate in vehicles. We’re working on pedestrian evacuation maps that show the best routes for pedestrians to take to evacuate,” said Forson. “You just need one person to crash or a power line to fall over the road, and the roads are unusable.”

“That’s why we’re pushing for a lot of vertical evacuation structures to be built – hotels or schools, because it’s not an easy problem to solve,” he said.

Moving inland, consider the Seattle Fault, considered capable of a magnitude 7. That may not sound like much more than the magnitude 6.8 quake of 2001 based on the numbers, but that the Nisqually quake occurred some 30 miles underground. Then consider that the Seattle Fault is a complex of faults with various branches that run at or just below the surface.

“The risk is complicated, but there are millions of people who live in the Seattle area,” said Forson. “What we know about this fault is that it’s ruptured may times in the past…it will happen again. We just don’t know when.”

Across the northern portion of Bainbridge Island, light radar or lidar images taken from airplanes clearly show the Seattle Fault running right on the surface. Another piece can be seen under the elevated lanes of northbound Interstate 5 in South Seattle not far from the Rainier brewery.

The Seattle Fault is also likely to create a tsunami that would inundate Harbor Island and much of SODO, Interbay, and the waterfront. It could also create dangerous currents and hazards to the north including Everett.

You can look at different geological hazard maps on the website of the Department of Natural Resources.

What about the localized tsunami risk? In the 1990’s, scientists produced an animation that shows inundation, and people won’t have much time to run to higher ground. In some areas getting up a hill to higher ground will be difficult. Some people in places like SODO and Harbor Island may have to flee to higher floors in a building.

The South Whidbey Island Fault is also dangerous. It’s significantly larger than the Seattle Fault, and South Whidbey could hand us a magnitude 7.5 earthquake. That could spell trouble not only for its namesake island but for south and north King County and further west.

And while scientists keep digging for more information and more situational awareness of what we face, the other problem is human.

“A lot of people are transplants,” Forson said. “They didn’t grow up here, they haven’t heard this story. So they don’t necessarily know the threats they face.”

Earthquakes. Volcanic eruptions. Devastating wind storms. Floods. Mudslides. Why is Strange Sounds focusing so much on disaster preps? It’s certainly not to scare you. Emergency planners all had a simple message: It’s not IF a disaster will happen, it’s WHEN.

The experts say few are ready. And being ready means being able to support yourself, your loved ones, your neighborhood for 2 weeks. Because after a region-wide event, it could take that long for help to come from the rest of the country and world.

Learning earthquake faults around where we live is a first good way to prepare the next devastating earthquake.