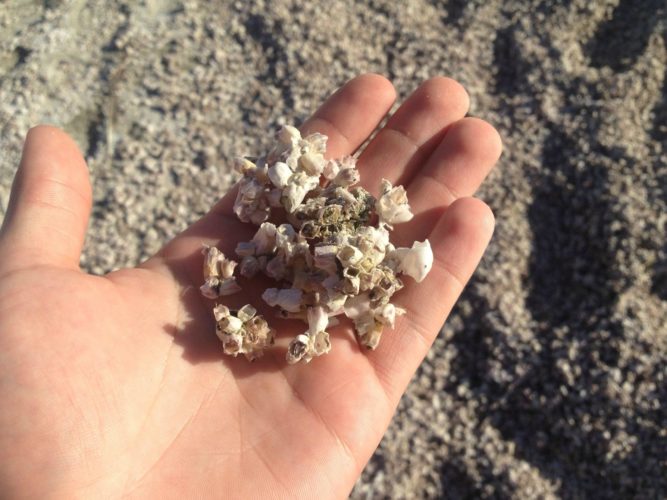 
Beaches are normally covered with soft white or golden sand…

At Salton Sea however, dead fish bones have replaced sand over time… Yep, there is no sand in these pictures, just bones.

The increasing salinity of the Salton Sea has killed millions of fish. Their bones accumulated on the beaches covering the sand.

The Salton Sea was created accidentally in 1905 when an irrigation canal diverted from the Colorado River broke. The lake formed within two years.

The sea has neither natural inlet nor outlet. Its salinity is increasing due to salt leeching from the soil and irrigation. The sea is 30% saltier than the Pacific Ocean.

And in some places there are so many bones that you literally sink a few inches.

According to BBC, if the sea dries out – which seems pretty likely – it will unlash clouds of toxic dust across Southern California.

This Physicist Says Electrons Spin in Quantum Physics After All. Here’s Why : ScienceAlert
‘Funky Worm’ Fossil Helps Explain The Mysterious Origins of Amphibians : ScienceAlert
Mysterious ‘Zone of Uncertainty’ Inside The Brain Reveals a Surprise : ScienceAlert
Sword Mistaken For Replica Is Actually An Ancient 3,000-Year-Old Weapon : ScienceAlert
There’s a ‘Lost City’ Deep in The Ocean, And It’s Unlike Anything We’ve Ever Seen : ScienceAlert