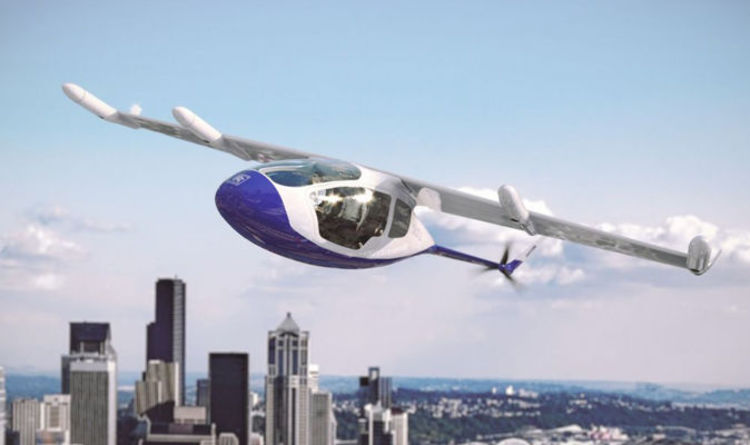 
The engine maker’s futuristic design will also be able to fly at an astonishing 250mph for up to 500 miles as it aims to make cross country travel rapid.

It is 101 miles, as the crow flies, between London and Birmingham, meaning the flying taxi would take just 20 minutes to travel between the cities.

Rob Watson, who heads Rolls-Royce’s electrical team, said: “Electrification is an exciting and inescapable trend across industrial technology markets and, while the move to more electric propulsion will be gradual for us, it will ultimately be a revolution.

“Building on our existing expertise in electric technologies and aviation, Rolls-Royce is actively exploring a range of possible markets and applications for electric and hybrid electric flight.

“Rolls-Royce has a strong track record as pioneers in aviation. From developing the first turbo-prop and jet engines, to creating the world’s most efficient large civil aero-engine and vertical take-off and landing solutions, we have a very strong pedigree.

“As the third generation of aviation begins to dawn, it’s time to be pioneers yet again.”

The flying taxi concept will have five propellors with wings which can rotate up to 90 degrees, allowing it to take off and land vertically.

The electric vertical take-off and landing (Evtol) vehicle is being displayed at the Farnborough International Airshow in Hampshire.

Rolls-Royce said that as well as using the vehicle for personal use, it could also be used for cargo and military use.

The British firm hopes to have the flying taxis in the air as soon as the early 2020s.

Rolls-Royce is not the only firm to be developing flying taxis.

Earlier this year, Uber revealed plans to release flying taxis in as little as two years and the firm hopes they will be driverless within 10 years.

The company previewed its Uber Air design models which are designed to taxi up to four people in the skies of major cities.

Uber unveiled the model, which is has been dubbed the vertical take-off and landing (VTOL) craft, at the Elevate Summit in Los Angeles.

The Remains of This Recently Found Ancient Structure Are Even Older Than The Pyramids : ScienceAlert
We Have Our First Look at Neptune’s Rings in 33 Years, And They’re Glorious : ScienceAlert
Watch a Tiny Robot Blob Transform Into Even Tinier Bits to Squeeze Through Cracks : ScienceAlert
How Many Ants Live on Earth? Scientists Came Up With an Answer : ScienceAlert
REM Sleep May Exist to Heat Your Brain Up From The Inside : ScienceAlert