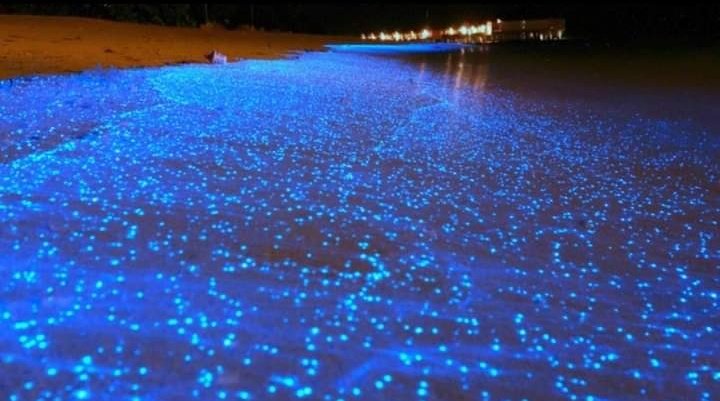 
Visitors of Thiruvanmiyur beach, Chennai were treated by a pretty unusual sight over the weekend: Bioluminescence.

Beachgoers were left amazed by the bluish glow along the beach. However, scientists say the unexpected phenomenon may have been caused by either heavy rain and/or discharge of sewage into the ocean on Sunday night.

Because bioluminescence is a rare happening in Chennai pictures and videos of the phenomenon started making the rounds on the internet on Sunday.

Bioluminescence is a natural phenomenon caused by Noctiluca scintillans, a phytoplankton species that converts their electrical energy into light energy when washed ashore. Many marine organisms such as algae, jellyfish, sharks, worms, starfish and crustaceans exhibit this feature.

Bioluminescence is not a very common event in India, where only a few beaches are famous for their glow-in-the-dark waves, such as South Goa’s Betalbatim beach and Lakshadweep’s Kavaratti island. Around the world, the Blue Grotto in Malta is one of nine caves near the island of Filfa that produces a phosphorescent glow. Similar to the Blue Grotto are Bioluminescent Bay in Puerto Rico, San Diego in California, Navarre Beach in Florida, and Toyama Bay in Japan.

But, things are probably not so beautiful in reality. According to marine experts, the phenomenon is an indicator of climate change and can have an impact on deep sea fishing.

One Simple Idea Makes It Much Easier to Manage Your Weight Over Time : ScienceAlert
Hypertension Drug Shown to Extend Lifespan And Slow Aging in Animals : ScienceAlert
An Iceberg The Size of London Has Broken Free From Antarctica Ice Shelf : ScienceAlert
Newly Discovered Fossil Reveals Hundreds of Teeth ‘Never Seen Before in a Pterosaur’ : ScienceAlert
This Species of Carnivorous Plant Evolved Into a Toilet And Is Now Winning at Life : ScienceAlert