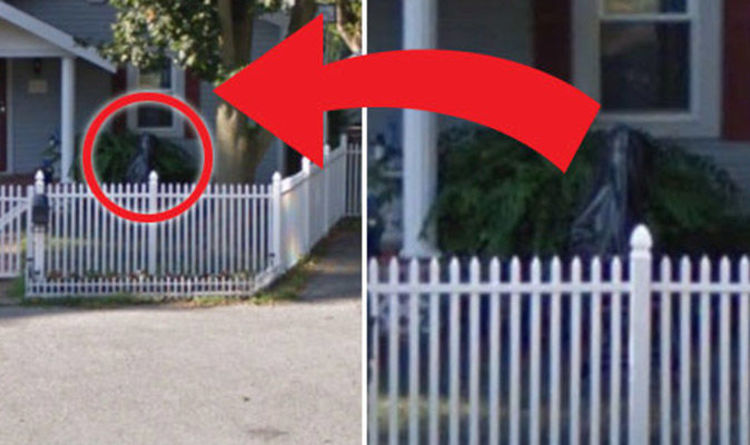 
The alleged apparition was spotted in the city of Lawrence in Indiana, the US.

The picture features a small house at the end of a cul-de-sac.

But after zooming in, the unsettling figure becomes visible.

It has been described as a small demon child which seems to stand at the front of the house as it gazes into the camera, Dailystar.co.uk reports.

The figure appears to have green skin and dark hair, with its hands tucked away.

Colton Keasey said it was his grandparents home.

He shared the snap on Twitter with the caption: “I was looking something up and someone please tell me why there is little ghost girl in front of my grandparents’ house.

“I swear this is directly from Google Maps!”

The image has been shared on social media with some viewers saying it will be looked at by paranormal investigators.

Another thought it been added by CGI, with a fourth suggesting it could be a Halloween decoration in the garden or even a bin bag.

Earlier this week we reported on another disturbing still from Google Maps.

Users spotted what appears to be a blonde girl, who resembles a horror film doll, behind a red car.

After zooming in, the child appears eerily pale and with her dark eyes fixed on the camera.

Some claim the picture offers evidence of a supernatural being, but sceptics point to a much simpler explanation.

They say that is just a doll or a poster pinned to the door in front of the red car.

A Splash of Milk in Coffee May Have Health Benefits We Didn’t Know About : ScienceAlert
Planting More Trees in Cities Would Save Thousands of Lives, Scientists Say : ScienceAlert
We Used to Hate Commuting. Now We Realize We’ve Lost Something. : ScienceAlert
Incredible ‘Fairy’ Robot Sails on The Breeze Like a Floating Dandelion : ScienceAlert
Scientists Discover a Weird New Form of Ice That May Change How We Think About Water : ScienceAlert