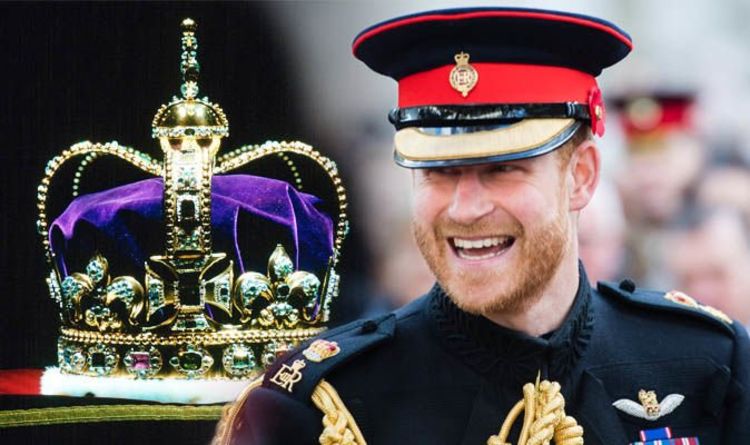 
Prince Harry, the Duke of Sussex, is currently the sixth in line to the throne but his fortune could turn in the near future. According to a prophecy made by the French mystic and apothecary Michel de Nostradamus, the 34-year-old Prince will be crowned King by a court order. The bizarre claim was made by YouTube channel 2 Minute Facts, which discussed Nostradamus’ prophecies about the Royal Family. The French mystic is widely believed to have predicted a range of future events with pinpoint accuracy in the 16th century.

Nostradamus’ supporters claim he correctly foretold the rise of Adolf Hitler, the outbreak of World War 2 and the Great Fire of London in 1666.

And if the latest theory is true, Harry will sidestep his father the Prince of Wales and brother Prince William as the next King of Britain.

The conspiracy video about Harry states: “Adding to the satchel of prophecies is the prophecy of a new King on the throne. Wondering who this might be?

“Well, opening the doors of suspense, Prince Henry, the youngest son of Prince Charles and Princess Diana is supposed to be the next King sitting on the throne of Hales.

“Going back to the memory lane, we see Prince Henry to be least proficient and capable of the throne but when talking of Nostradamus prophecies, the youngest heir will be taking the throne by the order of the court.”

The supposed prophecy states Harry’s coronation will be met with scepticism and rejection but Harry’s charm will win over the “love for his people”.

Being the sixth in line to the throne, Harry’s odds of becoming King are incredibly low.

Prince Charles is the first in the order of royal succession, followed by his oldest son Prince William and William’s three children – Prince George, 5, Princess Charlotte, 3, and the seven-month-old Prince Louis.

And the news might come a burden to Harry who once suggested not a single member of the British monarchy truly wants to be crowned King or Queen.

He said: “Is there anyone in the Royal Family who wants to be King or Queen? I don’t think so, but we will carry out our duties at the right time.”

However, another Nostradamus prophecy suggests neither Harry or Prince Charles will be crowned before the monarchy is dissolved.

In his written works, Century 8 Quatrain 97, Nostradamus spoke of “great powers” changing and a “Kingdom growing no more”.

Online conspiracy theorists have suggested the line refers to the monarchy being dissolved.

READ MORE: Nostradamus predictions: Did he forewarn the world for 2018? Top chilling predictions

A post shared by user Mercurio on conspiracy forum Above Top Secret, reads: “At the end of the war the great powers change;

“Near the shore three beautiful children are born.

“Ruin to the people when they are of age;

“To change that country’s Kingdom and see it grow no more.

“Prince William was in fact born seven days after the end of the Falklands war.

“This predicts the end of the British monarchy and the beginning of a British republic happening very soon – William may never get to become King.”

Sceptics, however, point out Nostradamus’ cryptic passages are too vague to be considered genuine accounts of the future.

Brian Dunning, a science writer and creator of the Skeptoid Podcast, said: “Nostradamus’ writings are exploited in a number of fallacious ways.