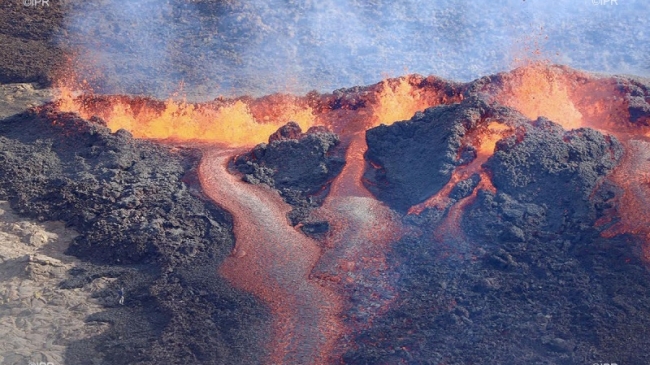 The Piton de la Fournaise is a shield volcano on the eastern side of Réunion island (a French department) in the Indian Ocean has started erupting at 1pm local time on July 29, 2019.

This is the third eruption of the year, which currently takes place on the Rosemond Chapel side and is clearly visible from Pas de Bellecombe. At least 3 cracks have been observed yet observed.

A seismic crisis first began at 5:13 am, indicating lava was was leaving the magma reservoir and spreading to the surface.

In its last report published around 6:30 pm local time today, the volcanological observatory of Piton de la Fournaise indicates “three cracks opened on the northern flank of the volcano over a total length of about 450 m, on the remains of the July 2018 eruption […] The three cracks with 20-30-meter-high lava fountains and lava flows of type aa extend about 500 m:

Public access to the upper part of the Piton de la Fournaise enclosure, whether from the Pas de Bellecombe trail or from any other trail is prohibited. It is recalled that the landing of aircraft in the area of ​​the volcano is regulated and subject to authorization from the Prefecture.

The volcano woke up for the first time this year on February 19th. The eruption stopped on March 10th. It had been marked by the appearance of two new fissures, in full eruption, as well as by lava flows almost reaching the Laves road.