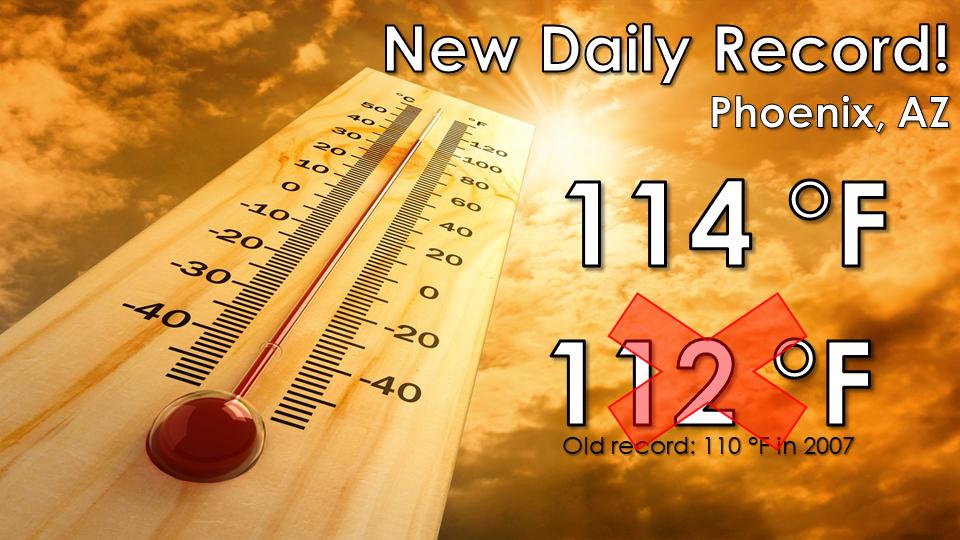 
This is scary and no, it isn’t deja vu.

Phoenix broke a high-temperature record for the third time in 2019 on Wednesday after breaking a record on Tuesday as well.

The National Weather Service tweeted the announcement shortly before 2 p.m.

The agency previously announced the broken record about 12:37 p.m. when the temperature reached 112 degrees. The Weather Service didn’t say if it expects even higher temperatures later into the afternoon.

The agency advises people in the Valley to limit their outdoor activity and double-check the back seat of their vehicle to avoid leaving children or pets inside.

High-temperature records have been broken with increasing frequency in the past couple of decades, a trend that’s become apparent in many places and is linked to human-caused climate change.

National Weather Service data for Phoenix shows that of the 92 days in the summer months from June through August, 43 of their high-temperature records occurred since 2000, compared with 25 records during the previous two decades.

There have also been long-term increases in average daily highs and average nighttime lows during summers in Phoenix. According to National Weather Service data, the average summertime temperatures in the city have increased from 93.6 degrees during the decade 1999-2008 to more than 94.4 degrees during the past 10 years — an increase of more than 0.8 degrees.

A Sea Of Concrete

The local urban-heat-island effect in Phoenix also is contributing to higher temperatures. The vast areas of the city that are paved over with concrete and asphalt soak up the heat from the sun, and then radiate it at night, pushing the city’s temperatures higher than surrounding rural areas.

Iñiguez pointed out that the heat takes an economic toll because people have to run their air conditioners more.

“We have some of these warm nights now,” he said, “where the temperature doesn’t drop below 90 degrees, so air conditioners are having to run around the clock.”

The heat can also be deadly. Last year, 182 heat-associated deaths were reported in Maricopa County, a toll that set a record for a third straight year.

“Heat is our deadliest weather that we have. It kills more people in Arizona and across the United States than any other weather phenomena,” Iñiguez said. “And even though it’s hot here and it’s always been hot, it is gradually getting hotter. And that does have a very significant impact.”

David Sailor, director of Arizona State University’s Urban Climate Research Center, told The Arizona Republic that the Valley’s low nighttime temperatures during the summer months have increased far more than its highs thanks to the urban-heat-island effect, as more development has occurred.

Sailor added that air-conditioning use among Valley residents creates a positive feedback loop that further increases outside temperatures.

Phoenix and other cities across the globe have spent years researching solutions to combat human-caused climate change. One solution, Sailor said, is to implement materials that reflect thermal radiation back into space rather than absorb it.

“Highly reflective surfaces in general help to cool the city. If the surfaces are cooler, then as the air flows over the surfaces that air is cooled as well.“

Trees and man-made shade structures are also common solutions that especially accommodate those forced to work outside with the sun beating down on them.

“For people who have to be outside during the extreme heat of the day, having access to shade — whether it’s from structures or whether it’s from trees — significantly improves their thermal environment,” Sailor said.

People Who Don’t Exist Look More Real Than Actual People, Study Finds : ScienceAlert
Viagra Linked to Much Lower Risk of Death in Men, But Questions Remain : ScienceAlert
Mysterious ‘Zone of Uncertainty’ Inside The Brain Reveals a Surprise : ScienceAlert
An Expert Explains Why The Radioactive Water Stored at Fukushima Should Be Released : ScienceAlert
Our Body Temps Have Been Dropping For 160 Years. Gut Microbes May Be Playing a Role : ScienceAlert