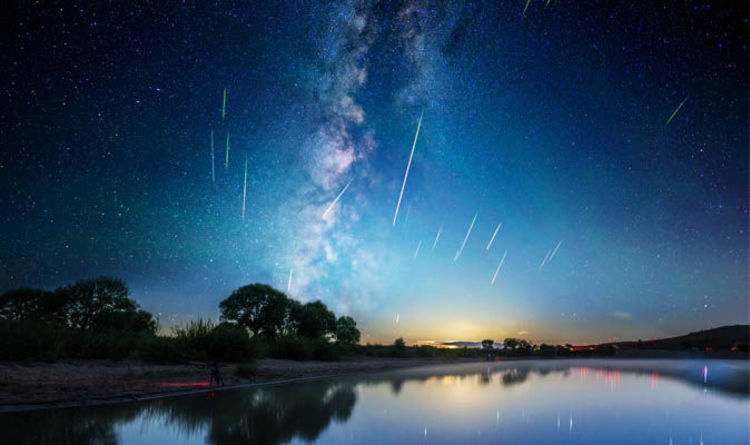 
The Perseids are among the most active meteor showers of the year but their late night peak might be daunting to most astronomy enthusiasts.

According to Dr Morgan Hollis of the Royal Astronomical Society, the shower will peak on the night between Sunday, August 12 and Monday, August 13.

The astronomy expert told Express.co.uk the eclipse will be best seen before sunrise on Monday, with a few tens of meteors streaking by every hour.

He said: “The best time to look will be on the night of August 12 when the sky is darkest, around midnight and in the early hours of the morning, at the peak of the shower.

“Some meteors should be visible as soon as it gets dark though – after 9pm in London – and some will also be visible in the nights before and after the peak, although with fewer meteors occurring per hour.”

But if you would rather stay indoors on the potentially chilly morning of the shower’s peak, the good news is there is a way to catch the shooting stars online.

Courtesy of the Virtual Telescope Project in Italy, the 2018 Perseid meteor shower will be streamed live over the internet.

Gianluca Masi, director of the Virtual Telescope Project, told Express.co.uk the skies this year will be “perfect” to enjoy the famous shower.

The embedded YouTube livestream below will kick off on the night of August 12 at 8.30pm UTC or 9.30pm UK time.

“We will share our all-sky camera, to show any potential meteor it captured.

“This year, because of the excellent sky conditions we mentioned above, we will be broadcasting our live feed from Castel Santa Maria, where the local community is working on a very important project to restore the local 16th-century church, of huge historic and artistic value, damaged by several earthquakes.”

The meteor shower always starts around mid-July and wraps towards the end of August, peaking about mid-way through.

During the peak, when the meteors are most intense, up to 100 have been known to brightly burn up in the atmosphere.

Dr Hollis said: “The Perseid shower happens every year around the same time, as the Earth passes through the same clump of debris on its yearly journey around the Sun.

“This debris was left by the comet Swift-Tuttle, last passing through the Solar System in 1992.

“As we look at them from Earth, the meteors seem to come from a small region of the sky in the constellation of Perseus, hence the name ‘Perseid’.”

We May Finally Know Why Oceans in The Southern Hemisphere Are Getting So Warm : ScienceAlert
Biology Inspires a New Kind of Water-Based Circuit That Could Transform Computing : ScienceAlert
3 Major Aquatic Animal Groups Can Trace Their Lineage to This Ancient Armored ‘Worm’ : ScienceAlert
Secret Clues in Tutankhamun’s Tomb Reignite The Idea That Nefertiti Is Hidden Nearby : ScienceAlert
Behold, The Epic Last Images Taken by NASA’s Asteroid Redirection Test Spacecraft : ScienceAlert