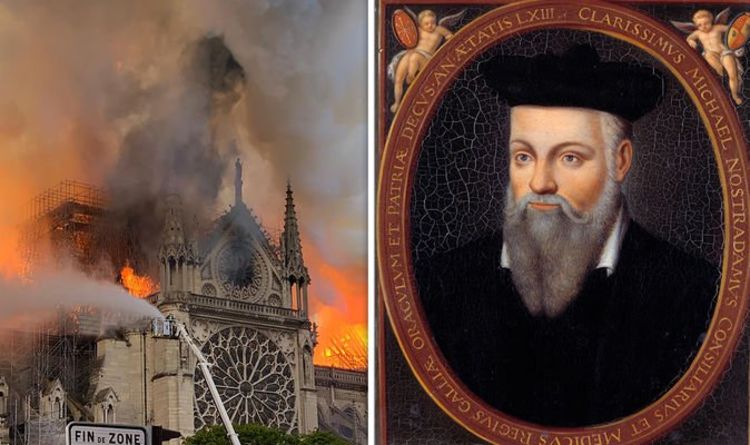 
The quote asserted “when the great cathedral glows red, so will begin the descent of man”. Nostradamus was a 16th-century French astrologer, regarded by some as having predicted a range of future events. However according to analysis from fact-checking website Snopes.com Nostradamus never wrote the alleged words in any of his primary works.

Nostradamus is best known for his Les Propheties, a collection of poems first published in 1555.

According to many of his admirers, the book has correctly predicted a range of major world events.

However the quote spread after the Notre-Dame blaze does not feature in the book according to Snopes.com.

The website commented: “The quote appears to be a modern invention falsely attributed to Nostradamus in order to generate likes, shares and comments.

“We found no mention of this supposed prophecy prior to the events on April 15 2019.”

A devastating fire swept through the historic Notre-Damn on Monday evening.

The buildings iconic spire and roof collapsed, whilst some of its walls were damaged.

Three people were injured during the inferno, including one firefighter.

French President Emmanuel Macron has vowed the Notre-Dame will be rebuilt within five years.

More than €800m (£692m) has already been pledged towards the reconstruction by business tycoons and French government agencies.

The Notre-Dame became a UNESCO World Heritage Site, as part of the ‘Paris, Banks of the Seine’ classification, in 1991.