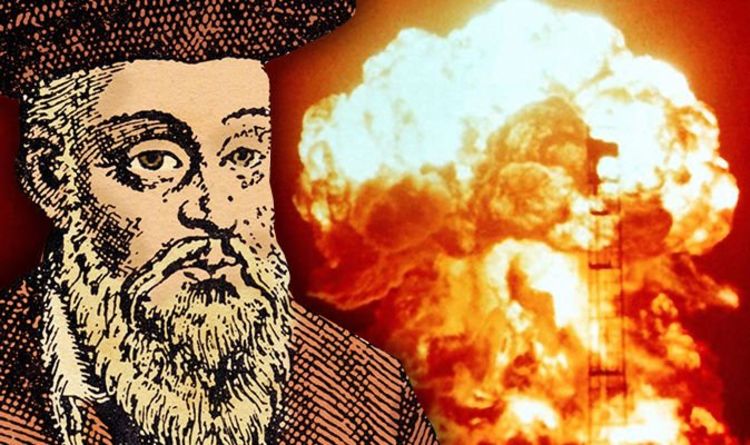 Michele de Nostredame, the 16th-century apothecary and author, is considered by many to be the greatest prophet and mystic ever born. Nostradamus left his footprint on history in 1555 with his greatest written work, the Les Propheties – a book which conspiracy theorists think holds the secrets of the future. Among his greatest accomplishments, Nostradamus’ supporters believe he predicted the Great Fire of London in 1666 and the rise to power of Adolf Hitler in 1933. And many doomsayers who study Nostradamus’ works for prophecies of the world’s demise, believe some of these cataclysmic events are yet to pass.

The outbreak of World War 3

Among Nostradamus’ most chilling warnings is the supposed outbreak of World War 3 sometime in the future.

Conspiracists point to one cryptic passage penned by Nostradamus, which is believed to describe a conflict between global powers.

The passage in question reads: “Twice put up and twice cast down, the East will also weaken the West. Its adversary after several battles chased by sea will fail at time of need.”

“The great man will be struck down in the day by a thunderbolt. An evil deed, foretold by the bearer of a petition.

READ MORE: 10 Nostradamus predictions that are YET to come true

“According to the prediction another falls at night time. Conflict at Reims, London, and pestilence in Tuscany.”

Another Nostradamus passage suggests a global war lasting 27 years will break out in Europe and ravage the continent.

The passage states: “The big war will start in France and all Europe will be attacked, It will be long and terrifying for everyone.

“And then finally there will be peace but only a few will enjoy it, A war will start between the two great world powers and it will last for a period of 27 years.”

READ MORE: When is WW3 predicted to happen?

A cataclysmic asteroid strike will wipe out the Earth

Some Nostradamus followers believe the French mystic predicted a rogue asteroid will one day strike the planet, causing widespread chaos and destruction.

At the place where Jason has his ship built, So great a flood shall come so suddenly

One particular passage mentions a monstrously-large “mountain” sinking countries and reshaping the landscape.

“Shall spread far, sinking many countries, Even the ancient landscapes to their foundations.”

READ MORE: Terrifying Nostradamus predictions which have come TRUE and those yet to pass

Another passage from Nostradamus’ Quatrain 8.16 mentions a great flood covering the land from where the mythological Jason built his ship.

It reads: “At the place where Jason has his ship built, So great a flood shall come so suddenly.

“One shall not have place or land to attach, The wave shall mount to Olympic Fesulan.”

Some believe the flood will be the result of an asteroid crashing into the Mediterranean Sea – a reference to Jason, the ancient Greek hero.

The rise of Mabus the Antichrist

According to Nostradamus, the literal personification of evil will arrive on Earth in the form of Mabus the Antichrist.

If John Hogue, a book author on Nostradamus’ prophecies is correct, Mabus could be already roaming the Earth freely.

The author said Mabus’ arrival was prophesied in Century 10, Quatrain 72, which points towards the year 1999.

The passage reads: “The year 1999, seventh month, From the sky will come a great King of Terror:

“To bring back to life the great King of the Mongols, Before and after Mars to reign by good luck.”

But the real danger will come when Mabus dies – an event which will trigger the outbreak of World War 3.

When this happens, a war against the “three Eastern kings” will engulf the world in turmoil.

Will Nostradamus’s predictions ever come true?

There is no scientific evidence to suggest Nostradamus’s writings are genuine accounts of the future and not very cryptic pieces of poetry.

According to science writer and skeptic Brian Dunning, interpreting events from Nostradamus’ quatrains requires a strong dose of hindsight.

He said: “Michel de Nostredame was truly one of the brilliant lights of his day, but to subscribe to false stories and urban legends is to disrespect who the man actually was.

A ‘Wormhole’ Built on a Quantum Computer Teleported Information as Predicted : ScienceAlert
Astronomers Spot The Biggest Galaxy Ever, And The Scale Will Break Your Brain : ScienceAlert
Mummies With Golden Tongues Discovered in Ancient Egyptian Necropolis : ScienceAlert
Psychologists Found a Weird Trick That Changes How Food Tastes : ScienceAlert
Study Attempts to Unravel The Best Ratio of Land to Ocean For Exoplanet Habitability : ScienceAlert