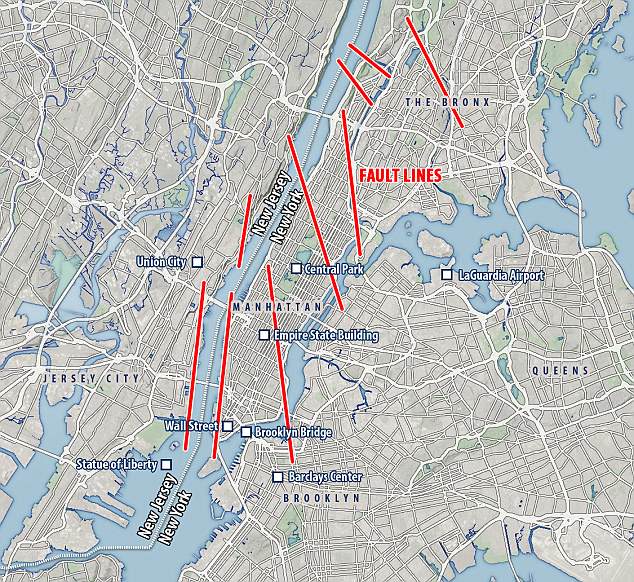 
New York City is at risk of a big earthquake that could level thousands of buildings as the city center is riddled with fault lines that could cause a significant earthquake.

The last 5.0 quake was in 1884 and they usually occur every 100 years, meaning NYC is overdue for the next destructive earthquake.

New York City is not thought of as a tremor hot spot, but the five boroughs are riddled with fault lines that could bring dozens of buildings down.

Because the city of 8.5 million people is so dense and littered with thousands of tall buildings, even a 5.0 magnitude earthquake nearby would cause such damage.

New York statistically gets a quake like that every 100 years and the last one was in 1884 – making it well overdue for another.

Experts warn NYC could come down like a house of cards and would cause $39 billion damage and 30 million tons of rubble if a M5.0 earthquake struck along the 125th Street fault line. More than 6,000 older buildings would collapse in a bigger M7.0 quake.

The biggest fault line runs down 125th Street all the way from New Jersey to the East River running past Central Park and into Roosevelt Island.

The Dyckman Street Fault runs from Inwood over to Morris Heights in the Bronx with the Mosholu Parkway Fault farther north.

The long East River Fault runs down the western side of Central Park before turning at 32nd Street and heading to the East River.

They are complemented by dozens of others making up a ‘brittle grid’ under the streets of Manhattan and the other boroughs.

Infrastructures and regions at risk

Nearby bigger faults in other states could also have their own earthquakes that could radiate shocks into New York through its faults.

The biggest danger is the thousands of older buildings not subject to stringent anti-earthquake codes from 1995 onwards.

Even a moderate quake would shake them enough to dislodge bricks and masonry, littering the streets and preventing emergency services from bringing help.

A 5.0 or higher could see many of those buildings come down like a house of cards, destroying homes and trapping people in the rubble.

The most susceptible areas are those built on sediment as opposed to harder bedrock that insulates against the shaking, according to the New York City Area Consortium for Earthquake Loss Mitigation.

Downtown Manhattan and parts of Midtown would be hit hardest, but upper Manhattan, especially Central Park, would be less affected.

Also at risk are the massive cast iron tubes where trains frequently rush under the Hudson River to New Jersey, which could be badly damaged.

They were built well before earthquakes were considered in buildings, and no longer sit snugly against the earth around them.

A sudden tremor could cause disaster if a train was rattled around inside, or if the tunnel sprung a leak under the strain.

As New York is so big, mitigating the dangers and potential economic losses is very difficult and the full cost won’t be known until an earthquake arrives.

New York’s last earthquake was on October 27, 2001, on the 125th Street Fault, but didn’t do any damage. The most recent M5.0 quake was in 1884 which opened the ground in Brooklyn, brought down chimneys and cracked walls. An earlier M5.2 in 1737 caused damage but the city was much less built up. About 6,000 unreinforced buildings would collapse if the city was hit by a 7.0 magnitude earthquake. New York has had 200 quakes since the arrival of Western settlers.

Always be prepared for the next Big One in your area!

Bacteria Can Use Plastic Waste as a Food Source, Which Isn’t as Good as It Sounds : ScienceAlert
Babies May Not Be Born With a Microbiome After All, Scientists Say : ScienceAlert
Scans of Mummified ‘Golden Boy’ Reveal He Was Covered in Magical Protections : ScienceAlert
An Expert Explains Why The Radioactive Water Stored at Fukushima Should Be Released : ScienceAlert
Major Blow as Experimental HIV Vaccine Fails in Late Clinical Trial : ScienceAlert