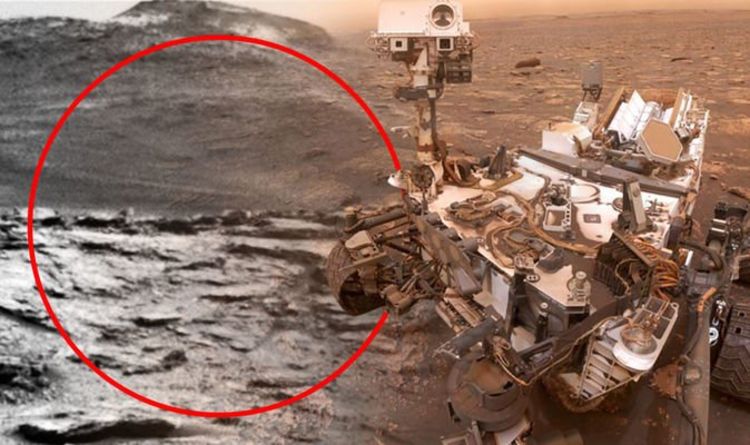 
NASA’s Curiosity Mars Rover is an intrepid unmanned space probe built to examine the Gale crater on Mars as part of the US space agency’s mission to explore the Red Planet. Since Curiosity landed on Mars almost seven years ago, NASA’s car-sized vehicle has survived the Red Planet’s brutal conditions to cover almost 13 miles. In that time, Curiosity made a landmark discovery, revealing evidence of water on Mars. However, a prominent alien life conspiracy theorist believes the NASA Curiosity Rover has now uncovered proof of something even more incredible – an alien dome built on the surface of Mars.

Speaking on his ETDataBase.com blog, Scott Waring said: “This is the most recent photo from the Mars rover.

“This ancient dome on Mars has stood the test of time.

“I have reported this dome when it was further away, but never before have we seen it so close as now.”

Mr Waring then speculated widely about the purpose of the supposed alien base, barely perceptible among the rocky detritus lining the desolate landscape.

He said: “Its reflective smooth surface shows it was built to reflect the heat and keep the interior cool.

“It looks like the NASA rover is driving in this direction, so let’s keep our fingers crossed.

“We may see an entrance or ancient writing on its walls when close.”

Some followers of the NASA Curiosity Mars mission have voiced their frustration at the apparent slow speeds of the rover, which averages less than two miles a year.

In short, the Martian landscape is extremely treacherous and NASA cannot allow any necessary damage to be inflicted up their £2billion ($2.5billion) project.

Curiosity is designed with a rocker-bogie suspension that allows the wheels to climb over objects larger than the wheel, itself.

That means it has to hit the object, rock the suspension to push the wheels over the object and then handle the drop on the other side.

That is a lot of potential stress and that stress magnifies with speed.

NASA’s engineers needed to account for both individual shocks and the cumulative damage that can be caused by many small shocks, over time.

It is more important that Curiosity be able to get over an obstacle than to move quickly, so Curiosity’s motors are geared for torque rather than speed.

And, with the delay in signal time, NASA needs to ensure if something unexpected occurs, the flight controllers have time to respond.

However, a swift follow-up experiment showed the methane levels had sharply decreased, with less than 1 part per billion by volume detected.

The disappointing finding suggested the earlier detection — the largest amount of gas Curiosity has ever found — was one of the transient methane plumes that have been observed in the past.

“We’re more motivated than ever to keep measuring and put our brains together to figure out how methane behaves in the Martian atmosphere.”