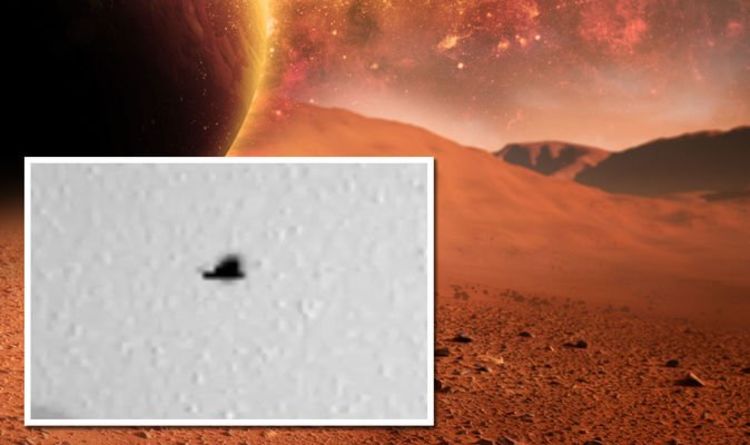 
US space agency NASA has been exploring the Gale Crater on Mars since 2012 via its car-sized Curiosity rover. The NASA rover’s comprehensive mission involves examining the apparently arid Martian climate and geology and even assessing whether microbial forms of alien life ever existed on the Red Planet. Now a prominent UFO conspiracy theorist believes the NASA Curiosity Rover has captured a flying bird in one of its Red Planet photos.

He wrote: “This flying bird on Mars was found by Marcelo Irazusta who actually found a bird flying across the surface of Mars captured last week by the Curiosity Rover!

“This is impossible, and yet, there it is … captured in a photo on a NASA website.

“The Curiosity Rover has a 13 minute delay from the time they push the keys on Earth to the time rover gets it.

“So if this is a large bird, then it was taken by accident and was probably not in that area for long.

“Of course it could be a UFO – aliens like to use nature to inspire their structures and ships.’

The so-called sighting is little more than a black speck showing up against a great sky in the black and white photograph taken on Sol 2446.

Mr Waring speculated about the potential ramifications of such a dubious find.

He wrote: “It looks like a soaring eagle … which if this is true, it may mean one of two things.

“Either animals exist on Mars or – and I hate this idea, but it needs to be considered – the rover might not be on Mars at all, but on Devon island in Canada.

“Devon is a desolate island area with only a handful of people and NASA has gone there many times to test the rovers in a environment similar to Mars.”

This is because Devon Island’s harsh climate mimics the environmental conditions on Mars and other planets.

Unexpected anomalies on photographs taken on Mars and the Moon and beamed back to Earth for further examination by NASA are nothing new.

However, the reality of the anomaly is far more prosaic.

Camera lens flares, cosmic rays or just reflected sunlight are the most likely candidates for the Mars anomaly.

Cosmic rays are formed by highly charged atomic particles, often travelling from outside the solar system, which are capable of producing tricks of the light on impact.

Cosmic rays are more common on Mars than on Earth due to the Red Planet’s thin atmosphere which offers little resistance to such cosmic radiation.