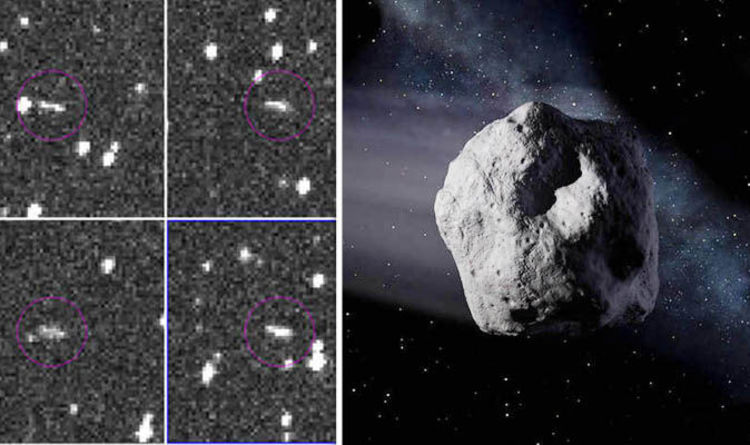 
The boulder-sized asteroid appeared from the depths of space on a collision course with the planet on Saturday, June 2.

The asteroid, dubbed 2018 LA, popped up on NASA’s radars at the Catalina Sky Survey, sending astronomers into disarray.

Because the asteroid took NASA’s scientists by surprise the experts were not able to initially calculate an exact trajectory for the space rock.

Hours before impact, the ATLAS asteroid survey narrowed down the asteroid’s path down to a spot over southern Africa.

Witnesses saw the asteroid light up the night skies over Botswana and a farmer in Ottosdal, South Africa, caught it on CCTV footage.

Thankfully the rogue asteroid disintegrated in the atmosphere before it could do any damage to the surface – but why did NASA spot the asteroid so late?

When the asteroid was first detected the rock was zooming through space nearly as far away as the moon’s orbit.

The asteroid was measured to be about two metres (6 feet) in diameter which is a size considered “safe” by the US space agency’s experts.

Lindley Johnson, Planetary Defense Officer at NASA Headquarters explained: “This was a much smaller object than we are tasked to detect and warn about.

“However, this real-world event allows us to exercise our capabilities and gives some confidence our impact prediction models are adequate to respond to the potential impact of a larger object.”

A quick trajectory for the asteroid was calculated at the Center for Near-Earth Object Studies (CNEOS) at NASA’s Jet Propulsion Laboratory in Pasadena, California, but the asteroid was deemed harmless.

He said: “The discovery of asteroid 2018 LA is only the third time that an asteroid has been discovered to be on an impact trajectory.

“It is also only the second time that the high probability of an impact was predicted well ahead of the event itself.”

Crocodiles Seem to Be Thriving in a Toxic River That’s More Like a Sewer. Here’s Why : ScienceAlert
Chilling Glimpse Into Our Future if We Survive Another Million Years : ScienceAlert
These Mysterious Fungi Belong to an Entirely New Branch on The Tree of Life : ScienceAlert
Astronomers Spot The Biggest Galaxy Ever, And The Scale Will Break Your Brain : ScienceAlert
Mummies With Golden Tongues Discovered in Ancient Egyptian Necropolis : ScienceAlert