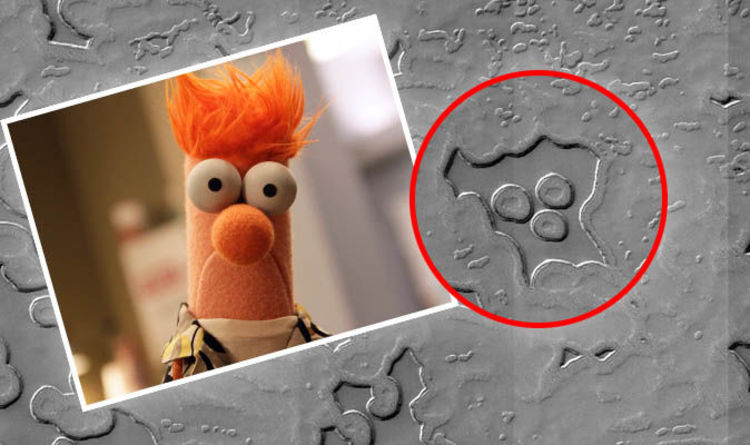 
Outside of Earth, Mars appears to be the only inhabited planet – even if these inhabitants are NASA’s remote robotic rovers.

But one of the US space agency’s interstellar cameras has made a startling discovery about another potential resident of Mars.

NASA’s team behind the High Resolution Imaging Science Experiment (HiRISE) were stunned earlier this week after they snapped a clear picture of what appears to be a face near the Martian South Pole.

With two bulging eyes, a big round nose and messy hair the face was like nothing ever seen before in any science fiction alien thriller.

The face appears to be much more akin to a popular TV show character loved by children worldwide – Beaker the Muppet.

Space fans following NASA’s HiRISE work online were quick to spot the resemble of the bizarre Martian formation and NASA joined in on the fun.

The space agency tweeted: “While the global dust storm has obscured much of the surface we’ve still been able to get some good images of the polar region – 247km above the surface.”

One Twitter user, @UFOL3TA, immediately noticed uncanny resemblance and tweeted to NASA: “I can see the Muppet Beaker on the right pic.”

Another person, Jeff Pfeiffer @15172cda7c96459, parroted the popular puppet character by tweeting out its characteristic and incoherent: “Me meme me me meme?”

NASA tweeted out in response a comparison photograph of the Martian formation and Beaker next to one another and the resemblance is undeniable.

Beaker the Muppet is one of the many colourful characters on the childrens’-favourite The Muppet Show.

The orange coloured puppet is the unfortunate assistant of the scientist Dr Bunsen Honeydew – both characters are named after basic laboratory equipment.

Beaker the Muppet made his first appearance on the 202nd episode of The Muppet Show but is yet to truly appear anywhere outside of the children’s show, least of all on another planet.

Maybe one of Dr Bunsen’s failed experiments launched the puppet into space? Or perhaps the image is peculiar mind trick known as pareidolia.

Pareidolia is an interesting psychological phenomenon which causes people to see faces and patterns where they do not exist.

This was the rational explanation accepted by NASA when it said: “And today’s HiPOD offers up a nice dose of pareidolia as well.”

Mischa Visser, @MischaDakar, took the joke one step further and noticed a Martian formation close to “Beaker” was eerily reminiscent of the Disney character Scrooge McDuck.

UFO hunters often fall prey to the mind trick by spotting faces, structures and aliens in pictures of the Moon, Mars and other stellar bodies.

Superconductivity Model With 100,000 Equations Now Contains Just 4 Thanks to AI : ScienceAlert
Experts Estimate The Scale of The Nord Stream Pipelines Methane Leak : ScienceAlert
Long COVID Is Still Raising More Questions Than Answers, Say Researchers : ScienceAlert
A Rare Condition Makes Hair Truly Untamable, All Thanks to These Genes : ScienceAlert
Ancient Burial of a Young Girl Shows How We Carried Our Babies 10,000 Years Ago : ScienceAlert