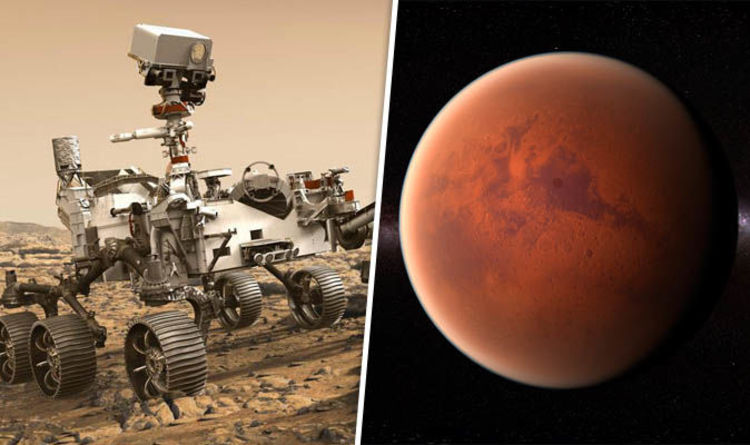 
NASA is due to launch its next £1.9billion ($2.5billion) robotic explorer to Mars by the end of the decade.

The rover will drill into the Red Planet to collect samples of rock in search of alien microbes.

After three days of intense debate, hundreds of NASA scientists and space exploration enthusiasts have settled on four perfect landing sites for the rover.

According to Thomas Zurbuchen, associate director of the Science Mission Directorate at NASA, choosing the right landing spot will shape the future of NASA’s research.

He said: “The Mars 2020 landing site could set the stage for Mars exploration for the next decade.

“I’m looking forward to the spirited debate and critical input from the science and engineering community.

“Once returned to Earth, these samples will likely become the most analysed soil samples in history, as they promise to address some very tantalising questions driving NASA’s Science program.”

Columbia Hills, named after the 2003 Space Shuttle Columbia disaster, was the previous landing spot of the Mars Exploration Rover Spirit in 2004.

So far, Jezero and Northeast Syrtis have come out on top of the list – tied for 158 votes – and Midway came in a close second.

The ultimate call on where exactly NASA’s next Mars rover lands will belong to Mr Zurbuchen.

The goal of the NASA 2020 Mars mission is to explore the Red Planet for evidence of past habitability and microbial life.

Scientists will use the instruments aboard the Mars rover to probe, excavate and analyse rock samples.

The rock samples will be sealed in tubes and left behind on the planet for future missions to pick them up.

NASA’s experts will also use the opportunity to asses Mars’ hospitability for future manned missions.

NASA said: “The landing site for Mars 2020 is of great interest to the planetary community because, among the rover’s new medley of science gear for surface exploration, it carries a sample system that will collect rock and soil samples and set them aside in a ‘cache’ on the surface of Mars.

READ MORE: Aliens on Mars: Are these NASA photos of ‘ALIEN faces’ on Mars evidence of UFO activity?

“A future mission could potentially return these samples to Earth.

“The next Mars landing, after Mars 2020, could very well be a vehicle that would retrieve these Mars 2020 samples.”

Mars 2020 will blast off towards the Red Planet onboard a United Launch Alliance (ULA) Atlas V rocket from Cape Canaveral Air Force Station in Florida in July 2020.

Mr Zurbuchen said: “Make no mistake, we want those samples back.”

READ MORE: Why THIS could be a ‘SHOWSTOPPER’ for Elon Musk’s hopes of colonising Mars