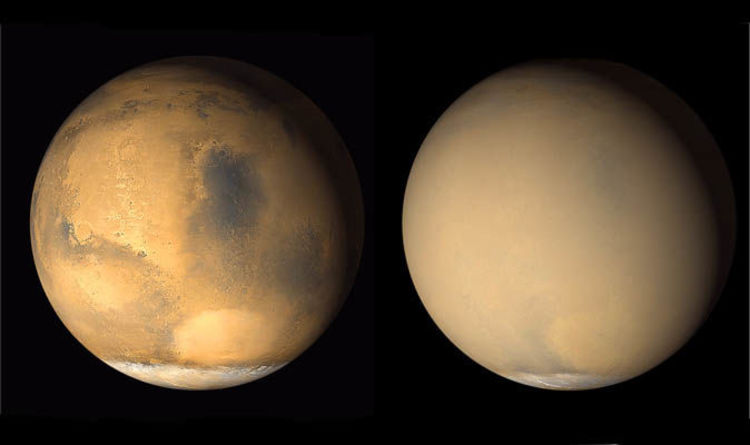 
NASA first noticed signs of the approaching storm on Wednesday, May 30, before a quarter of the planet was lost.

Before and after photos snapped a month apart by NASA’s Mars Global Surveyor reveal the intensity of the raging storm.

The dust storm has completely blanketed out all visible detail on the planet and surface conditions are equally dire.

A series of simulated photos of Mars’ skyline show the dust storm slowly blotting out the sun in the sky – as seen by NASA’s Opportunity rover.

NASA said: “The left starts with a blindingly bright mid-afternoon sky, with the Sun appearing bigger because of brightness.

“The right shows the Sun so obscured by dust it looks like a pinprick.”

According to the space agency, Martian dust storms are a seasonal occurrence and can at times costume the entire planet.

Rich Zurek, space scientist for the Mars Program Office, said the storm is now days away from ballooning to cover the entire Red Planet.

He said: “The situation on Mars really highlights the key question about Mars today, which is ‘why do these massive widespread dust events occur in some years but not in other years?’

“Local dust storms, similar to ones in the American Southwest or the Middle East for instance, can occur in any season on Mars but they typically grow to continental size only during the southern spring to summer when Mars is a little closer to the sun.

“Out of those seasonal storms that do occur only about a dozen or so have ever, in the historical record or the modern record, expanded to circle the planet or cover the globe.

“Thanks to the ongoing Mars Exploration Program, Mars is being monitored by a series of spacecraft orbiting the planet on essentially a daily basis for nearly 20 years.

“Planet encircling storms were observed in 2001 and 2007, however in the five Mars years since then, no regional storm has grown to planetary scale but the current storm on Mars is just days away from meeting that classification of a planet encircling dust event.”

More photographs snapped by the Mars Curiosity rover show the intensity of the storm dramatically increasing over a three day period.

The Curiosity rover is currently entrenched in the Gale Crater area where dust activity is starting to pick up.

Mars Once Had So Much Water, It Could Have Been An Ocean World, Scientists Say : ScienceAlert
A Strange Thing Happens to Wolves Infected by Infamous Mind-Altering Parasite : ScienceAlert
Millions of ‘Silent Synapses’ Could Be The Key to Lifelong Learning : ScienceAlert
These Mysterious Fungi Belong to an Entirely New Branch on The Tree of Life : ScienceAlert
Astronomers See a Star’s Final Scream Into a Black Hole Halfway Across The Universe : ScienceAlert