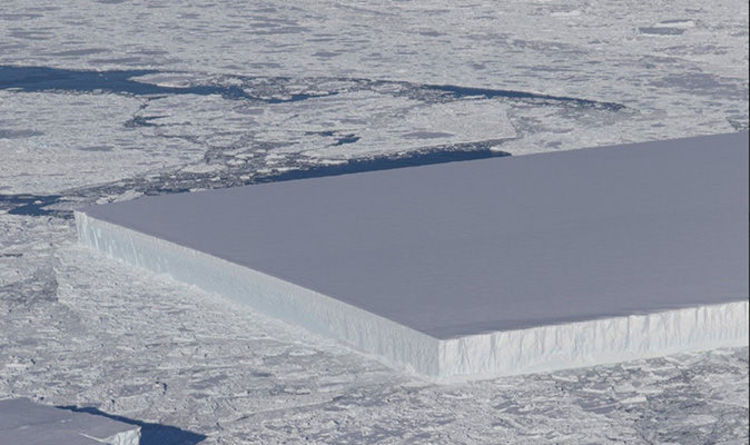 Experts said the striking ice-formation is completely natural, created as ice breaks away from an ice shelf.

The odd iceberg was spotted by a NASA scientist, who posted a picture to social media site, Twitter.

NASA was conducting a long-term aerial survey of polar ice, named Operation IceBridge, when the iceberg was spotted as they flew over the northern Antarctic Peninsula.

Mr Harbeck said that seeing icebergs with such straight edges was not unusual.

“I thought it was pretty interesting; I often see icebergs with relatively straight edges, but I’ve not really seen one before with two corners at such right angles like this one had.”

“I was actually more interested in capturing the A68 iceberg that we were about to fly over, but I thought this rectangular iceberg was visually interesting and fairly photogenic, so on a lark, I just took a couple photos.”

The A68 iceberg is a chunk of ice about the size of the state of Delaware which was released by the Larsen C ice shelf last year.

The IceBridge flight is a survey of the planet’s polar ice and is providing a 3D of the ice in the Arctic and Antarctic.

In an interview with ScienceLive, NASA scientist Kelly Brunt explained that this iceberg formation was called a “tabular” iceberg.

Ms Brunt said: “We get two types of icebergs, We get the type that everyone can envision in their head that sank the Titanic, and they look like prisms or triangles at the surface and you know they have a crazy subsurface.

“And then you have what are called ‘tabular icebergs. What makes this one a bit unusual is that it looks almost like a square.”

Mysterious Changes Identified in The Brains of People Who Get Migraines : ScienceAlert
‘Baby Brain’ Is Real, Scientists Confirm, And We May Finally Know Why : ScienceAlert
Octopus Brains Evolved to Share a Surprising Trait in With Our Brains : ScienceAlert
The Science Behind Why You Sprain Your Ankle So Often, And What You Can Do About It : ScienceAlert
Scientists Revived Ancient ‘Zombie Viruses’ Frozen For Eons in Siberia : ScienceAlert