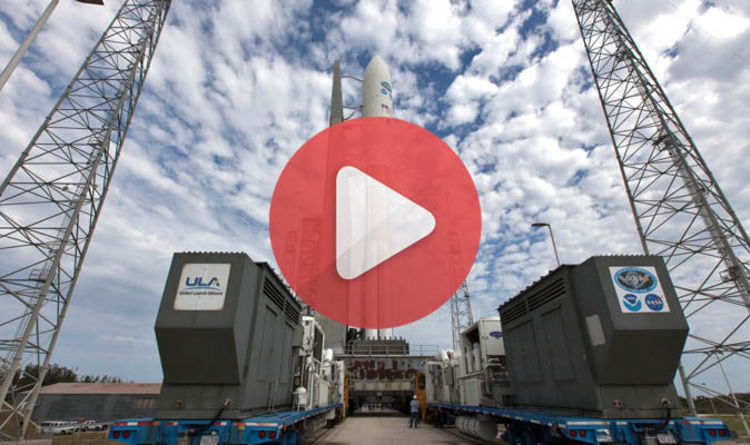 
The powerful and expendable Atlas 5 rocket will soon blast off from Florida with a top of the line weather satellite inside its cargo hold.

Pencilled in for a two-hour launch window from 5.02pm EST (10.02pm GMT), the entire endeavour will be streamed online on NASA TV – NASA’s very own round the clock broadcast service.

The webcast embedded above is scheduled to start about 30 minutes before blast off at 4.30pm EST (9.30pm GMT).

NASA’s meteorologists have already given the space agency the green light for a 90 percent chance of favourable lift off weather this afternoon.

Today’s launch is significant because it strengthens a crucial partnership between the US National Oceanic and Atmospheric Administration (NOAA) and NASA.

NOAA’s satellite division tweeted today: “The US will soon have two of the most advanced weather satellites ever, operating in tandem.

The Geostationary Operational Environmental Satellite-S (GOES-S) is the second in a pair of highly sophisticated weather satellites used to track wildfires cyclones, storms and other natural threats to the US.

Once the Atlas successfully delivers the satellite into orbit, it will be renamed GOES–West, and pair up with GOES-East to scan the entirety of America, the Atlantic and Pacific.

NASA said: “Once in space, GOESS will work in tandem with a partner satellite to watch over the Western Hemisphere.

“The satellites circle the Earth in geosynchronous orbit, staying in a fixed position in the sky.”

The monstrous rocket stands over 190 feet tall and boasts an impressive weight of more than 300 tonnes.

The rocket is one of the most reliable and widely used instruments in NASA’s arsenal, operated by Lockheed Martin Space Systems and Boeing Defense, Space & Security’s ULA launch service venture.

ULA had been the go to private contractor for Government space missions, but since 2016 more and more mission have been awarded to rival company SpaceX.

But today marks the rocket’s 76th launch and so far the Atlas has a perfect mission success rate in an industry where five to 10 percent of all laches fail, according to aerospace expert Chris Kunstadter.

Four years prior, the same rocket model delivered the Mars Reconnaissance Orbiter on a similar mission of the red planet.