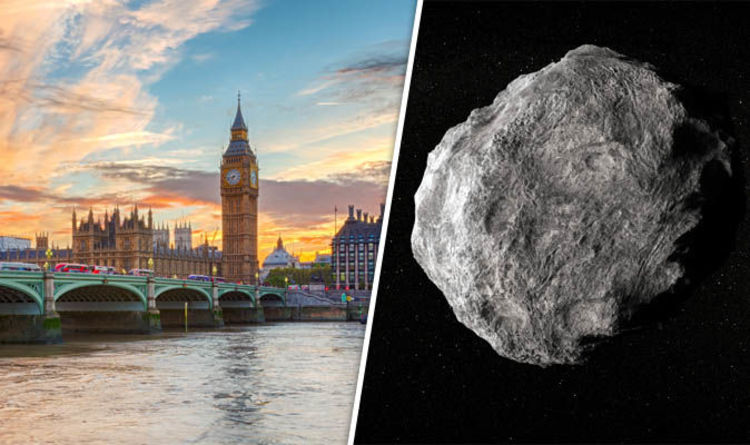 An asteroid on either side of the estimate could wreak absolute havoc on Earth, particularly if it hit a city the size of UK’s capital.

Past impacts of smaller asteroids have been known to level areas larger than the total area of Greater London.

According to the Smithsonian Astrophysical Observatory, that particular asteroid could have been as small as 196.8 ft (60m) across.

Considering Asteroid UG1 could be as tall as Big Ben’s clock tower, or larger than the Great Pyramids of Giza, the potential threat to human life is unimaginable.

Data collected by the London Data Store and Greater London Authority suggest the total area of London measures around 606.99 square miles (1,572.1 square km) – an area smaller than the Tunguska incident.

The Smithsonian Observatory said it would only take an asteroid 3,280 ft in diameter to destroy an area of land the size of an average US state.

But the good news is Asteroid UG1 will avoid the Earth with a wide berth – of about 2.48 million miles (four million km) to be precise.

NASA predicts the space rock will reach its closest distance to Earth of approximately 0.02675 astronomical units (au) or 10.41 lunar distances (LD) around 3.45am BST (2.45am UTC) next Thursday.

One astronomical distance is an average measurement of the distance between Earth and the Sun.

A Lunar Distance is the average amount of space between the Earth and its Moon.

This means the asteroid will zip by the Earth 10-times farther than the Moon is on any given night.

But there is still reason to pay attention to the asteroid because UG1 is a so-called Near-Earth Object (NEO) on a Close Earth Approach trajectory.

The European Space Agency (ESA) defines NEOs as all asteroids and comets that could “potentially hit our planet, and depending on their size, produce considerable damage.”

The ESA said: “Near-Earth Objects are asteroids or comets of sizes ranging from metres to tens of kilometres that orbit the Sun and whose orbits come close to that of Earth’s.

The odds of an average NEO hitting Earth are slim but the space agency stressed the importance of tracking them to predict the possibility of future impacts.

Next week, the asteroid will speed through the void of space on its journey around the Sun at speeds of around of 30,019.6mph (13.42 km per second).

After the asteroid completes its flyby, NASA does not expect UG1 to make another close approach until December 29, 2021.