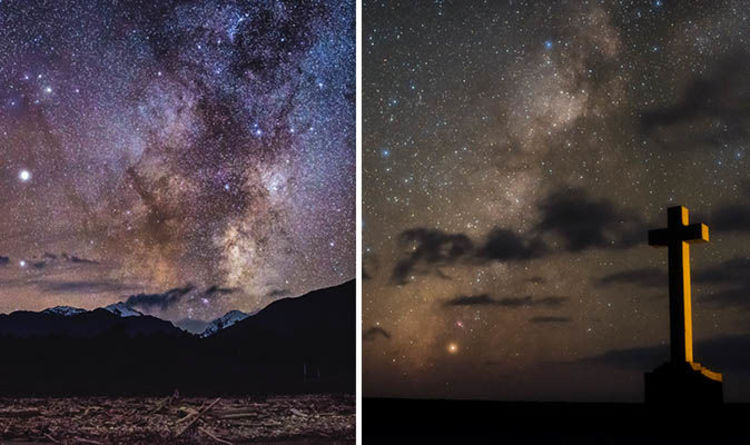 
The unusual event is due to a phenomenon known as perihelic opposition, in which the orbits of Earth and Mars align, bringing the two planets closer together.

Mars will be at its brightest on July 31, when it will be around 35.8million miles away from Earth.

Explaining the phenomenon, NASA’s website states: “Like all the planets in our solar system, Earth and Mars orbit the sun.

“But Earth is closer to the sun, and therefore races along its orbit more quickly.

“So sometimes the two planets are on opposite sides of the sun, very far apart, and other times, Earth catches up with its neighbour and passes relatively close to it.”

On July 27, Mars will be in perihelic opposition.

“Currently the brightest ‘star’, Mars will triple in brightness leading up to July 27.”

Mars opposition occurs on average every two years, and was last seen in May 2016.

It appears when Mars and the sun are on directly opposite sides of the earth.

However perihelic opposition occurs only every 15 to 17 years, and takes places when Mars opposition takes place within a few weeks of Mars’ perihelion, the points in its orbit when it is closest to the sun.

If the orbits of Earth and Mars were perfectly stable, then the two planets would reach their closest possible point at each perihelic opposition.

Yet the orbits of both planets are slightly tilted, and follow different paths.

Giant planets including Jupiter exert a gravitational pull on other celestial bodies such as Mars, which affects the orbits of different planets.

Mars’ orbit is more elliptical than Earth’s, and so the difference between its perihelion and aphelion is greater.

It has also become increasingly elongated over the past centuries, bringing the red planet closer to the sun at its perihelion and further away at aphelion.

The red planet will be able to be seen by the naked eye throughout July, outshining all but the brightest stars.

Cannabis For Pain Relief? Review of 20 Studies Provides Sobering Results : ScienceAlert
Scientists Glimpse Incoming Asteroid Just Hours Before It Makes Impact : ScienceAlert
Hypertension Inside Your Eye Could Be Making It Age Faster, Scientists Say : ScienceAlert
Octopus Brains Evolved to Share a Surprising Trait in With Our Brains : ScienceAlert
Colossal Exoplanet Is One of The Most Massive Super-Earths Ever Discovered : ScienceAlert