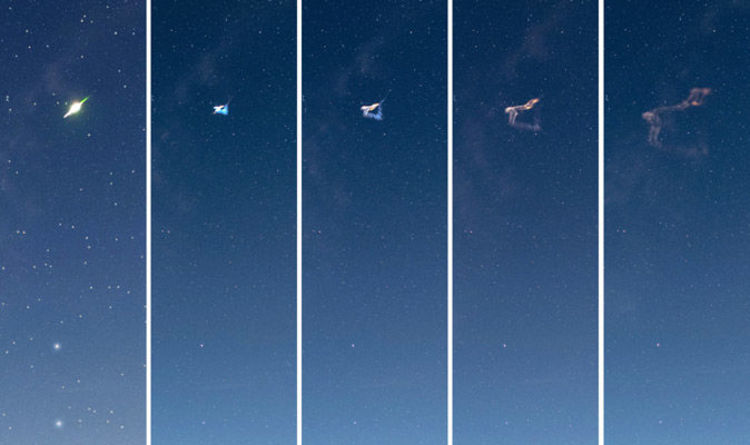 
Residents near Clun Castle, Shropshire, we left scratching their heads after spotting a bright light streaking through the clouds.

But landscape astro-photographer Nick Jackson was in the right place at the right time as he managed to snap some images of the mysterious object.

After spotting the light he instinctively grabbed his camera.

Mr Jackson said: “I immediately thought, ‘I hope that was caught in the frame’.

“It was a sheer stroke of luck that I just happened to be shooting the series of images when it happened.

“With things like that, you’ve got to be in the right place at the right time.”

The ball of light turned out to be a bright meteor which disintegrated as it impacted Earth’s atmosphere.

Our planet is currently passing through the debris trail left by the Halley’s Comet – now more formally known as Comet 1P/Halley.

Rock and ice falls from the comet, which passes Earth in October every year, burning up as they hit Earth’s atmosphere.

The annual event is known as the Orionid meteor shower and this year it peaked on the nights of October 21 and October 22.

However, it is rare to capture a shooting star this clearly, and Mr Jackson is pleased to have done so.

He said: “It’s very unusual to see a meteor that big. Because I was shooting the star trail, I couldn’t check the footage immediately.

“There are very few images out there that have captured this before.

“I posted it on Facebook on some astronomy groups and it just blew up over the weekend.

“The reason we photographers go out in the middle of the night and stand there in the freezing cold is because we’re obsessed with the beauty of the night sky, its peace and calm.

“And when you see something like that, it’s just awe-inspiring.”

Mr Jackson, from Ludlow, then combined the images into four seconds of footage.

He said: “To the naked eye, it’s over in a flash. You just see a streak of light and a bright ping and then it’s gone.

“However, the camera captures all the detail of the aftermath.”

Ancient ‘Weird Wonders’ Could Be Leftovers From The Cambrian Explosion : ScienceAlert
Alzheimer’s Gene Doesn’t Guarantee Dementia. Here’s What You Can Do to Reduce Risk : ScienceAlert
Volcanoes May Have Transformed Venus Into a Blistering Hellscape : ScienceAlert
Rapidly Melting Glaciers Are Releasing a Staggering Payload of Unknown Bacteria : ScienceAlert
‘SuperGPS’ Technology Accurately Pinpoints Your Position Within Inches : ScienceAlert