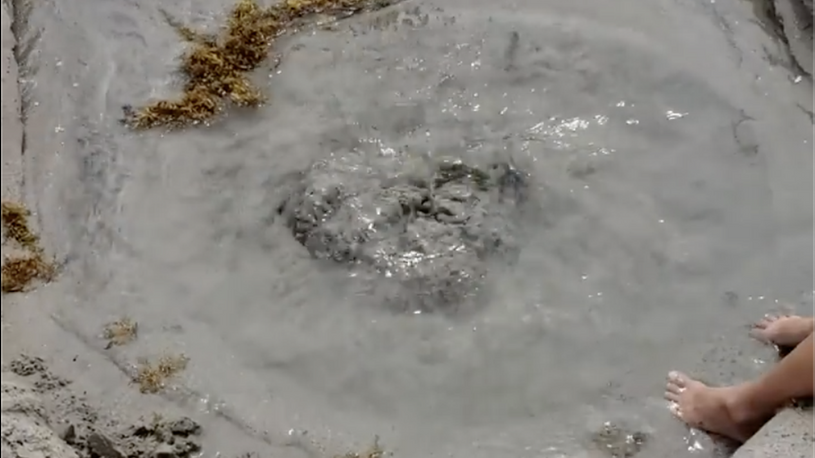 
A strange, gurgling hole on a Florida beach had some parents worried that their children could be sucked under the sand.

The hole that is releasing bubbling, swirling water appeared Thursday, August 2, 2019, on Juno Beach, and was first believed to be quicksand.

Jodi Jaroschak of Stuart, who was there with her twin daughters, Kayla and Maya, said the hole was not marked in any way that morning.

And she stuck her leg in… “and without any pressure or any resistance from the sand beneath, the water and sand instantly sucked me in, up to the very top of my hip. I was able to pull back out, but I could feel the suction from beneath, both my kids were scared to death.” OMG! That must have been terrifying!

The Facebook video recorded by Jodi and shown below is also pretty scary:

But the hole isn’t a mystery for eveyone. Another mother living in the area said she was aware of the hole and warned other parents about it. People here around know how to avoid the mysterious hole.

And a few days after Jaroshak posted the video, caution tape appeared around the hole and the source of the water was discovered.

UP CLOSE: The strange bubbling hole on Juno Beach that sparked parents’ fears on Facebook.

Loggerhead MarineLife staff and officials from Palm Beach County said the hole is not quicksand or a sinkhole. Instead, the bubbling and swirling effects are caused by water flowing out toward the ocean.

Yes, it’s the drain that has always been here. The only difference is that the shoreline used to go out further, so it was spilling out onto dry sand. However, now, it is spilling into the wet sand, and it is creating like a suction force.

No quicksand, no sinkhole… But a terrifying drain on Juno Beach, Florida.