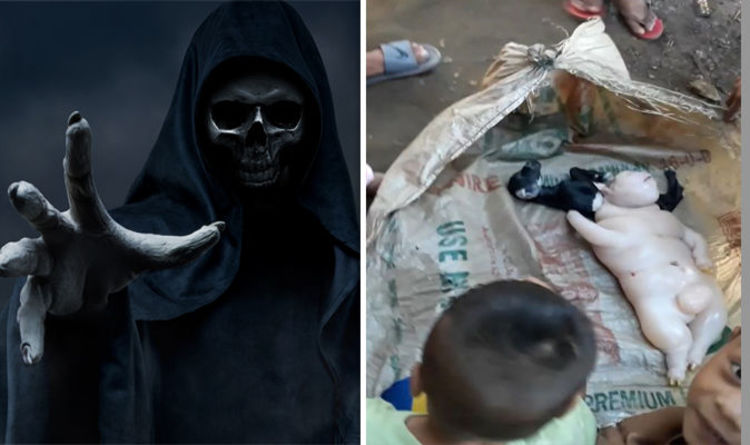 
Residents of a small village called Sultan Kudarat, Philippines, were left shocked when a farmyard pig gave birth to something which can only be described as a mutant. Some of the locals described the animal as a “mutant devil” and now fear that their families could be cursed as a result. Farmer Josephine Repique, 40, performed a cesarian on the pregnant mother goat on November 2 following difficulties during labour.

However, she quickly noticed something was amiss when a goat which looked part person, part pig was pulled from the doe.

Ms Repique said one of the kids “looked like a pig, with a mix of human”, as it was pale white and completely furless.

She said: “We were shocked. We can’t explain how it looks like that.

“All our neighbours flocked into our house to get a good look.”

Unfortunately, the mother goat and both the infants died shortly after, which has led residents of Sultan Kudarat to believe the “mutant devil” was cursed.

And now locals are worried that it has brought them bad luck too.

Ms Repique stated: “Nobody knows what it is, but it’s not a goat. It’s scary. We’re all wondering why it happened and if it is bad luck.”

However, Dr Agapita Salces of the Institute of Animal Science of the University of the Philippines, said that chances are the goat was not the devil incarnate, but rather the deformity was down to a genetic mutation in the womb which is caused by mosquito bites.

Dr Salces said: “It is a possible case of genetic mutation. It is also possible that the mother contracted a disease called Rift Valley fever from mosquito bites and this caused the impaired development of the infant.”