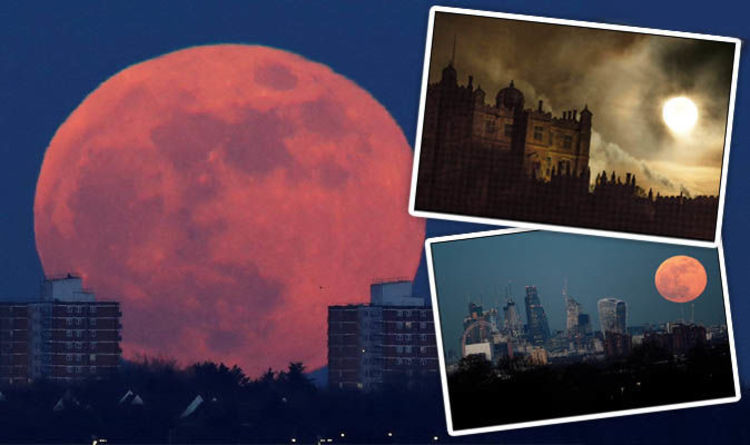 
The second supermoon of the year is now graciously travelling across the night sky, illuminating the whole of the UK.

The blue moon rose sometime around 5pm tonight, and astronomy experts are expecting it to stick around until Thursday February 1.

Royal Observatory Greenwich astronomer Dr Gregory Brown said: “It will be high in the sky from about 7pm and will be at its highest, and thus best, time at around 0.40am.

A stunning photo of the full moon was already snapped over London, with the average-than-usual moon dominating the London skyline.

Another breathtaking photo captured over London shows the reddish moon hanging in between two apartment blocks in North London.

In the south east of London, the giant supermoon was also photographed against the skeletal remains of a gas holder near to St Mary’s Stadium in Southampton.

The full moon also perfectly set the mood over Bolsover Castle in Bolsover, Derbyshire, with its light casting an ominous glow onto the 17th century building.

The supermoon appears so big tonight because a supermoon event occurs whenever a moon approaches its point of perigee, or closest possible orbital distance to Earth.

Space boffins at NASA teased that under these circumstances the moon can be up to 14 percent larger and 30 percent brighter.

But why does the moon appear red tonight? Is it because it is the famous blood moon?

The blood moon did indeed coincide with the lunar eclipse in the Eastern Hemisphere today, but the UK unfortunately missed out on the spectacle.

Another important fact is that the moon does not actually change colour tonight.

Instead, a process known as Rayleigh scattering makes red bands of light on the visible spectrum distort the way we see the moon. The same process paints sunsets red, skies blue and even the colour of blue eyes.

Tonight’s moon is also referred to as the blue moon, because it is the second full moon to rise in one calendar month.

Dr Daniel Brown, an astronomy expert at Nottingham Trent University, explained: “The Super Blue Blood Moon is a lunar eclipse that happens on the second full moon of the month.

“It also happens to be during the Moon’s closest approach, being within 10 percent of the nearest to Earth it can ever be.

Dr Brown added: “Events such as this cause us to look up and enjoy the skies above. The Moon is beautiful sight any time of the year.

“In the UK we will not be able to spot the eclipse but we should still get out there and watch the skies and the Moon and take some meaningful pictures of this beautiful sky-scape.”

Ancient Burial of a Young Girl Shows How We Carried Our Babies 10,000 Years Ago : ScienceAlert
A New FRB Signal Has Buzzed Nearly 2,000 Times in Just Two Months, Raising a Mystery : ScienceAlert
Superconductivity Model With 100,000 Equations Now Contains Just 4 Thanks to AI : ScienceAlert
A Stunning New 3D Model of The Cat’s Eye Nebula May Help Us Solve Its Mysteries : ScienceAlert
Termites Love Global Warming So Much That They May Make It Worse, Says Study : ScienceAlert