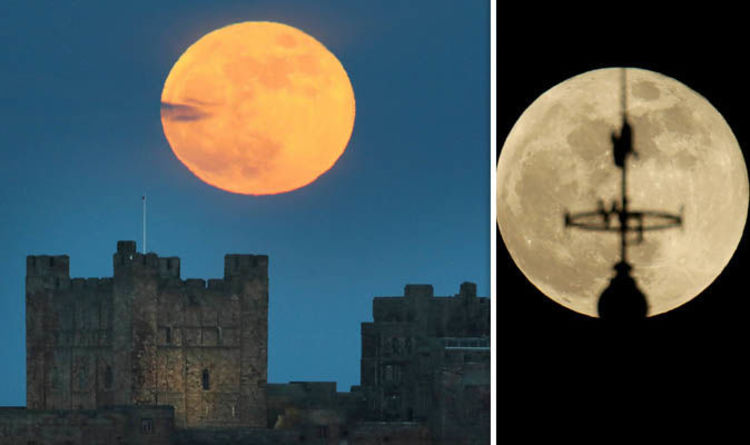 
But what time is the blood moon and will be there be one in Britain?

Today’s lunar spectacular was billed as a ‘super blue blood moon’ by NASA.

The once in a lifetime event was witnessed in many countries around the world – including Australia, Russia, the Middle East and the USA – but not everywhere.

It saw a lunar eclipse combined with a blue moon and supermoon.

Lunar eclipses are often called ‘blood moons’ due to the way they are tinged in a coppery red light as the moon is illuminated by the sun.

A supermoon is when a full or new moon appears much larger and brighter in the sky because its orbit point, known as the perigee, is closest to Earth.

And a blue moon doesn’t mean the earth is blue – it’s just the name for the second full moon in a calendar month.

What time is the Blood Moon?

Today’s blood moon has already taken place, with stunning images being shared on social media around the world.

It started at 10.51am (GMT time) and finished at 4.08pm with NASA live-streaming the whole event online.

Will there be a blood moon in Britain?

UK viewers missed the blood moon eclipse as it can only be seen at night-time but they do have the opportunity of seeing a super blue moon tonight.

Dr Gregory Brown at the Royal Observatory Greenwich said the best time to view the super blue moon will be in the early hours of tomorrow.

He said: “It will be high in the sky from about 7pm and will be at its highest, and thus best, time at around 12.40am.

If you’re going outside to watch, wrap up warm as temperatures will be dropping to below freezing later.

The next blood moon will rise above large chunks of the planet on July 27, 2018.

According to TimedDate.comm that eclipse will be partially visible in the UK.

Behold, The Epic Last Images Taken by NASA’s Asteroid Redirection Test Spacecraft : ScienceAlert
Termites Love Global Warming So Much That They May Make It Worse, Says Study : ScienceAlert
Deep Brain Simulation Could Alleviate OCD When Other Treatments Have Failed : ScienceAlert
Shimmering ‘Lakes’ Under The South Pole of Mars Might Be Something Else Entirely : ScienceAlert
Engineers Gave a Car a Pair of Eyes to Make Future Roads Safer For Pedestrians : ScienceAlert