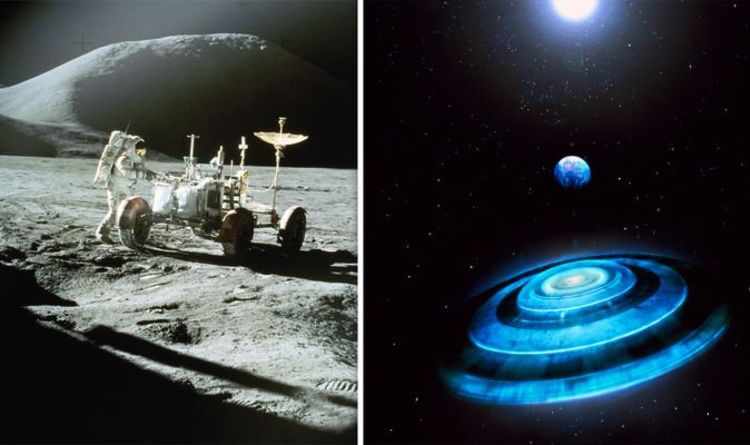 
The Apollo 15 crew, consisting of David Scott, Alfred Worden, James Irwin, became just the fourth group to land on the Moon in 1971. However, they were in for a shock once they got there, as they supposedly saw neatly organised tracks on the surface. A transcript between the astronauts and ground control shows how the crew spotted “organised” tracks leading up to Mt Hadley – a mountain range on the northern hemisphere of the Moon – leading to UFO theories.

The conversation between the crew and ground control is as follows:

Irwin: Tracks here as we go down slope.

Irwin: Right we’re (garble). We know that’s a fairly good run. We’re bearing 320, hitting range for 413 … I can’t get over those lineations, that layering on Mt. Hadley.

Irwin: They sure look beautiful.

Irwin: That’s the most organised structure I’ve ever seen!

Irwin: Nothing we’ve seen before this has shown such uniform thickness from the top of the tracks to the bottom.

The sighting has prompted speculation from alien hunters with a debate that still rages on to this day.

The conversation was picked up by UFOlogist Don Wilson, who in his 1975 book ‘Our Mysterious Spaceship Moon’, questioned whether NASA has any answers for the sighting.

Mr Wilson wrote: “What are these tracks? Who made them? Where did they come from? Does NASA have an answer for the people?”.

Conspiracy website UFO-Aliens.co.uk says there is something strange going on, with the page reading: “Many people feel we have not been told the complete truth regarding NASA’s space program, in particular the Apollo Missions of the late 60’s and early 70’s.

“Something is seriously amiss.”

Planting More Trees in Cities Would Save Thousands of Lives, Scientists Say : ScienceAlert
How a Dead Girl in Paris Wound Up With The Most-Kissed Lips in All of History : ScienceAlert
Scientists Discover a Weird New Form of Ice That May Change How We Think About Water : ScienceAlert
Wildfire Destruction in The Western US Has Doubled in Just 10 Years : ScienceAlert
Ancient Goo Spills The Secrets of How The Egyptians Mummified Their Dead : ScienceAlert