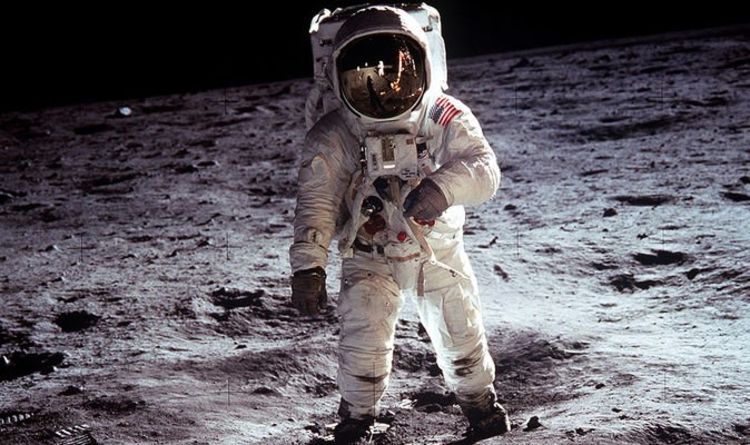 
It might be 50 years since famous images showed Americans Neil Armstrong and lunar module pilot Buzz Aldrin landing on the Moon in 1969, but some are still questioning whether or not Apollo 11 was staged. A recent YouGov surgery found one in six British people agreed with the statement “the Moon landings were staged”.

Many others across the world believe the landings were faked by NASA to boost the US’ power on the global stage.

The Apollo 11 Moon mission’s most iconic image is that of Aldrin wearing a thickly padded white spacesuit, and his visor reflecting the tiny figure of Armstrong and the Apollo Lunar Module.

But conspiracy theorists have cast doubt on the astonishing images, questioning who took the photo as there is no visible camera on either astronaut.

Another shows Aldrin facing the American flag, which appears to flap which again prompted questions because there is no wind on the Moon.

Meanwhile, others say the lack of stars in the sky in the photographs taken during the first landing in 1969 proves the first Moon landing was staged in a studio with a collection of light sources.

Bill Kaysing was the first person to self-publish a book on the theories, named ‘We Never Went to the Moon’ in 1974.

He later told New Jersey newspaper in 1977: “There are no stars in any of their pictures.

“If they were taken on the moon there would have been some stars in evidence.”

However many of the conspiracy theories have been debunked as the images were taken by cameras, with long exposure times, mounted on the men’s suits.

And the moment the astronauts actually took their first step on the Moon was was actually captured by a camera mounted on the Eagle lander.

The flag was not rippling in the wind but had simply become crumpled in storage and stars were not visible due to the bright light coming off the Moon’s white surface.

Alarming Spread of Bird Flu Continues as More Species Infected : ScienceAlert
Astronomers Find What May Be a Habitable World 31 Light-Years Away : ScienceAlert
Planting More Trees in Cities Would Save Thousands of Lives, Scientists Say : ScienceAlert
We Used to Hate Commuting. Now We Realize We’ve Lost Something. : ScienceAlert
A Billion-Dollar Biotech Company Plans to Bring The Dodo Back to Life : ScienceAlert