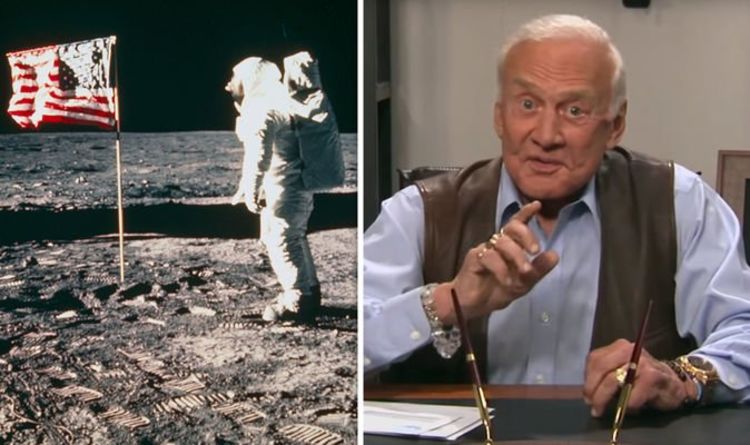 More than half a century ago, on July 1969, NASA completed the seemingly impossible Apollo 11 mission to put the first two men – Neil Armstrong and Buzz Aldrin – on the Moon. Armstrong made history, jumping off the lunar lander Eagle and delivering his legendary “one small step” speech to the millions of anxious people watching back on Earth. However, this account was questioned by CONAN viewers after presenter Conan O’Brien called in a favour to his friend – Aldrin – as part of an elusive prank in 2013.

Archive footage shows the moment Mr O’Brien was addressing a video sent in by a viewer who pointed out his mistake after confusing Aldrin and Armstrong during a previous episode.

The viewer stated: “Hello Conan, you had an error on your show in the video blog section, you had a picture of Buzz Aldrin.

“You said that it was Neil Armstrong – the first man on the Moon, when, in fact, the photo was of Buzz Aldrin.”

Mr O’Brien though, refused to be the butt of the joke, and instead pulled some strings.

Buzz Aldrin joked about a prank they played (Image: GETTY/CONAN)

The interview appeared on CONAN in 2013 (Image: CONAN)

Neil Armstrong and I pulled of humanities first extraterrestrial prank

While laughing, he told the viewer: “Here’s the bad news, you are dead wrong, that is Neil Armstrong in that photo, not Buzz Aldrin.

“If you doubt me, here’s a message from a man who should know.”

Mr Aldrin then appeared on the screen, backing up his new pal, before detailing a ludicrous story.

He said: “You’re wrong and I’m going to prove it, let’s look at the photo.

“You say that’s me, okay – check out the name badge, it says Aldrin – looks like you’re right.

The photo in question (Image: GETTY)

“But notice the helmet, can you see my face? No!

“This is the secret I’ve been keeping for half a century.

“On July 20, 1969, Neil Armstrong and I pulled off humanities first extraterrestrial prank.

“Just before we left the lunar module, we switched spacesuits.”

Things went one step further though, when Aldrin even claimed it proved he was the first man on the Moon.

Conan joked that he had not made a mistake (Image: CONAN)

Aldrin was called in to help (Image: CONAN)

He joked: “If you want proof then zoom in on the reflection on the helmet, you can tell it was me.

“This also means that I, Buzz Aldrin, was actually the first man to walk on the Moon.

“I can prove that as well, roll the footage with state-of-the-art digitally enhanced audio.

“That’s one small step for man, one giant leap for me, Buzz Aldrin.

“Thank you Conan, for letting me set the record straight.”

Neil Armstrong was the first man on the Moon (Image: GETTY)

On his return to Earth, Armstrong was questioned by the general public for shying away from the limelight and notoriously avoiding interviews, leading some to question him.

However, Neil deGrasse Tyson put any speculation to bed earlier this year during an episode of his StarTalk podcast.

He told listeners: “Neil Armstrong was not gregarious, he was a very quiet man and did not seek publicity.

“He’s sitting there, in his head, figuring stuff out, it’s the active mind of a restless brain of the engineer.

The three were questioned over their actions (Image: GETTY)

“This is what was captured.”

Fellow NASA astronaut Mike Massimino was a guest on the show and gave his own verdict.

He added: “When I first met Neil, he got up in front of us and it was like we’re meeting our hero.

“He’s the man, right? But he gets up there and it seemed like he was almost painfully shy, like it was hard for him to talk.

“He didn’t mention the Moon at all, he talked about test flying and how important that is and how you have to be diligent about it and how much he loved it.

“After he was done we got to the questions and answers, then we asked him what it was like on the Moon.

The day NASA made history with Apollo 11 (Image: GETTY)

“But up to that point, he was delivering his message and almost painfully shy, but he loved so much what he did that’s what he focused on.”

Dr Tyson pressed: “Do you think NASA chose him to be the first on the Moon because he does not seek publicity?

“Do you think they thought it through?”

Mr Massimino agreed momentarily, before adding why he changed his mind.

He explained: “I think that they picked someone humble.

“Actually, I used to think that maybe at first, but I think lately, in the last few years, I’ve changed my thinking of it.

“Because I think that is almost too much thinking.

“I think really what they saw was this was the right man to land on the Moon.”