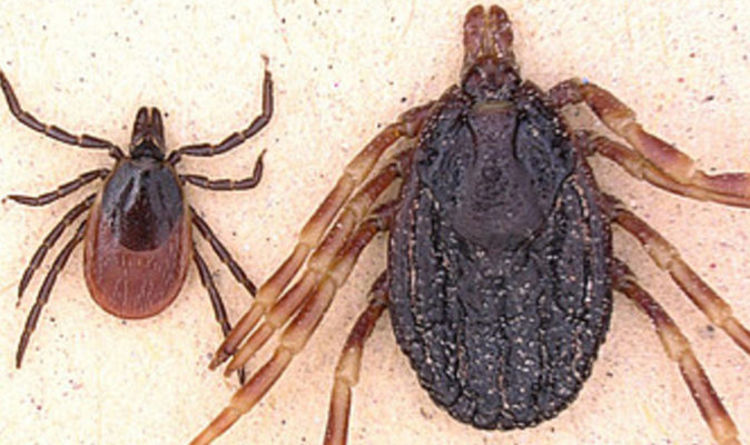 
Scientists in Germany have discovered a tropical tick which can grow up to an INCH LONG – 10 times bigger than a common tick.

The ticks, known as Hyalomma marginatum have the potential to spread the viral disease Crimean-Congo fever (CCHF).

Symptoms of CCHF include fever, muscle pains, headache, vomiting, diarrhoea, and bleeding into the skin. A QUARTER of those contracting Crimean-Congo fever will die.

Researchers have blamed the unusually hot weather over Europe for the cause of the ticks movement northwards as more birds have migrated to Europe following the scorching temperature.

The ticks were found in farmyard animals including horses.

Seven of the species were discovered this year – previously there have only been two examples of tropical ticks in Germany, one in 2015 and another in 2017.

Scientists are now concerned that as the warm temperatures continue to become more common in Germany, France and the UK the ticks could settle there and migrate across Europe permanently.

Parasitologist Ute Mackenstedt from the University of Hohenheim in Stuttgart said: “We assume that we have to reckon with more and more tropical species of ticks in Germany that can settle here due to good weather conditions.”

Dr Lidia Chitimia-Dobler, tick expert at the University of Hohenheim and the Institute for Microbiology (IMB) of the German Federal Armed Forces in Munich, said: “Five of the seven ticks we can determine beyond doubt, four are the species Hyalomma marginatum and one of the kind Hyalomma rufipes.

“We did not expect ticks here in Germany at this time.”

Dr Gerhard Dobler, physician and microbiologist at the IMB, added: “In one of the specimens found, we were able to prove the pathogen of a tropical form of tick typhus.”

Weight Lifting in Old Age Does More Than Just Keep Your Muscles Strong : ScienceAlert
3 Major Aquatic Animal Groups Can Trace Their Lineage to This Ancient Armored ‘Worm’ : ScienceAlert
Control of a 6-Qubit Processor in Silicon : ScienceAlert
Superconductivity Model With 100,000 Equations Now Contains Just 4 Thanks to AI : ScienceAlert
New Discovery Means Parkinson’s Could Be Diagnosed With a Swab in Just 3 Minutes : ScienceAlert