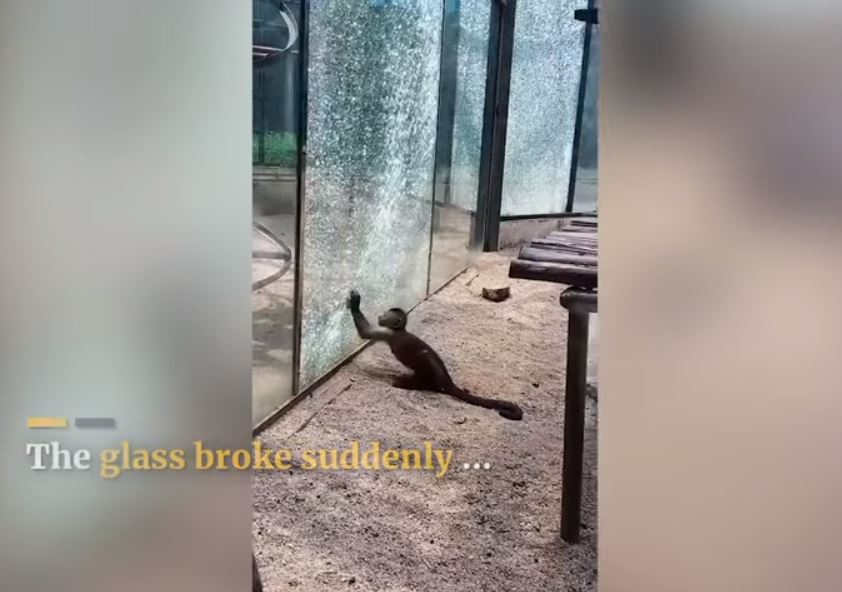 
A monkey was filmed breaking a glass pane of the enclosure it was in, with a stone at a zoo in central China’s Henan province.

Of course, the staff later removed all the rocks in the enclosure.

On August 20, tourists gasped as the little monkey picked up a sharp stone and proceeded to whack it against the side of its glass enclosure. After a couple of attempts, the glass shattered, frightening the furry assailant and causing it to flee.

“The monkey was sharpening the stone, then it started hitting it on the glass. The monkey scared itself away, but it came back to take another look and even touched it.” said Mr Wang.

Zoo staff told reporters that the animal is particularly skilled when it comes to using tools, and will often use stones to crack open walnuts while its companions simply bite them. According to the zoo, both onlookers and the monkey came out of the ordeal unscathed.

Was the animal hitting the glass out of boredom or curiosity, or was it trying to escape? The monkey may well have been stressed due to living in captivity, and a number of commenters have pointed out that keeping highly intelligent wild animals, such as primates, enclosed is cruel.

This strange animal behavior is kind of similar to these striking baboons in a Netherlands’ zoo. Anyway, the footage is a powerful reminder of the debate surrounding zoos: should we be entrapping wild animals for our own entertainment?

JWST Has Found Life’s Elemental Building Blocks in The Depths of Darkest Space : ScienceAlert
Dogs Can Be Aggressive For Lots of Reasons, And One of Them Is You : ScienceAlert
Scans of Mummified ‘Golden Boy’ Reveal He Was Covered in Magical Protections : ScienceAlert
This Species of Carnivorous Plant Evolved Into a Toilet And Is Now Winning at Life : ScienceAlert
Our Body Temps Have Been Dropping For 160 Years. Gut Microbes May Be Playing a Role : ScienceAlert