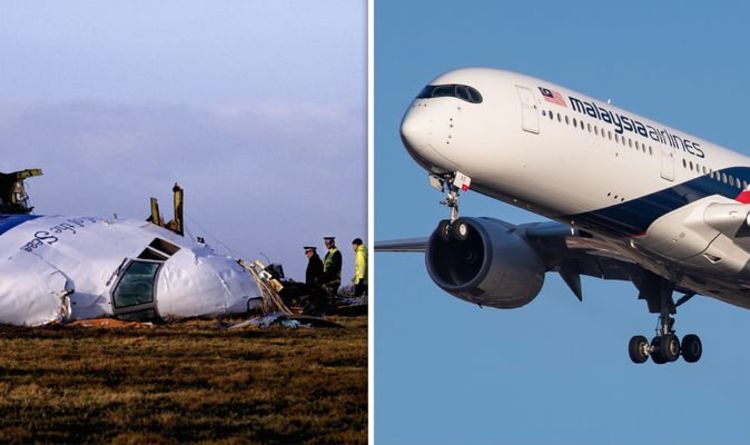 
Malaysia Airlines flight 370 vanished en route from Kuala Lumpur to Beijing with 239 people on board and it is still a mystery as to what exactly happened. Meanwhile, Pan Am Flight 103 was destroyed by a bomb on December 21, 1988, en route from Frankfurt to Detroit via London and New York. N739PA came down over Lockerbie in Scotland, killing 243 passengers, 16 crew and 11 people on the ground.

In the aftermath of MH370’s disappearance, certain similarities between the incidents were noticed.

The sudden loss of radar contact and the lack of a distress signal were among these.

“Back in 2014, in the days immediately after the plane goes missing, one explanation being considered is a terrorist bomb.

“Like MH370, there was no distress call and the aircraft disappeared from radar screens instantaneously.”

However, a key difference between MH370 and the Lockerbie bombing is that the wreckage of N739PA was found and it is confirmed to have been an explosion that brought the plane down, whereas the wreckage of MH370 was never found.

The perpetrators of the Lockerbie bombing were traced back to Libya and in 2001 Abdelbaset al-Megrahi, a Libyan intelligence officer, was found guilty of 270 counts of murder.

He was jailed for life but released in 2009 on compassionate grounds after being diagnosed with prostate cancer and he died in 2012.

Meanwhile, Libyan leader General Muammar Gaddafi accepted responsibility for the Lockerbie bombing in 2003 and paid compensation to the families of the victims.

Curiously however, whilst accepting responsibility he still maintained that he was not behind the attack.

Accepting responsibility was part of a list of requirements set out by the UN for Libya to have crippling sanctions lifted.

In contrast, no perpetrators have ever been identified for MH370’s disappearance.

A terrorist bomb is not the official theory, which suggests the plane flew until it ran out of fuel over the Indian Ocean.

However, there are dozens of other theories, none of them conclusive.

One Simple Idea Makes It Much Easier to Manage Your Weight Over Time : ScienceAlert
Dogs Can Be Aggressive For Lots of Reasons, And One of Them Is You : ScienceAlert
JWST Has Found Life’s Elemental Building Blocks in The Depths of Darkest Space : ScienceAlert
Hypertension Drug Shown to Extend Lifespan And Slow Aging in Animals : ScienceAlert
Scans of Mummified ‘Golden Boy’ Reveal He Was Covered in Magical Protections : ScienceAlert