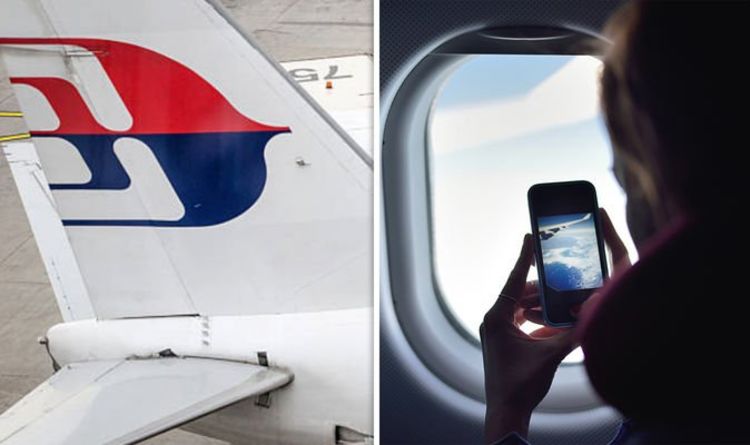 
MH370 left Kuala Lumpur Airport on March 8, 2014, destined for Beijing, China with 239 passengers on board. However, the Boeing 777 jet last communicated with air traffic control at 1:19am, before mysteriously vanishing over the South China Sea. Over the years, many have questioned why none of the passengers on board used their mobile phones to raise concerns, should an emergency have broken out.

Many cite the 9/11 attacks and how passengers scrambled to make calls at the final moments.

However, experts have revealed why they may not have been able to do the same on MH370.

According to radar analysis, the plane is believed to have been flying as high as 45,000 feet and as low as 23,000 feet.

Yet, even at the lowest possible estimates, Vincent Lau says the plane was too high to register with mobile towers.

The wireless communications specialist told CNN in 2014: “If you look at the data, in this case, the altitude at which the plane was traveling is too high.

“Even on the ground it wouldn’t be easy to pick up from that distance, and if you are flying it’s even more difficult because at those angles you are only picking up what we call leakage from the side loops of the antennas, which are substantially weaker than the signals from the main loops of the base stations.”

Bill Rojas, director of telecom research at IDC Asia Pacific revealed the plane would need to be flying at a much lower altitude to stand any chance of picking up a signal.

He said during the same interview: “In terms of the altitude it would have to be no higher than around 10,000 feet, anything higher would be problematic.

“If the plane was flying over northern Malaysia or southern Thailand – basically the rural area – then it’s very possible that a cell tower could register the signal from the phones, assuming they were on.

“Technically it is possible.”

However, Mr Rojas admitted that there was a flaw to the theory.

He detailed that the aircraft would have had to be flying at speeds of under 150mph in order for passengers to make or receive calls.

Most planes cruise at roughly 450 to 500mph, which would make the possibility of making a call impossible.

However, there could be another reason why passengers could not use their phones.

Some experts have claimed it is possible that the passengers suffered from hypoxia – a lack of oxygen to the brain – after a fire broke out on board.

This is supported by a discovery made by an investigation team appointed by the Malaysian government in 2015 to probe the missing plane.

They found the emergency oxygen system on the flight deck of MH370 had to be repaired shortly before takeoff.

A pressurisation fault was one of eight defects reported to maintenance staff the morning before the doomed flight took off, according to the team.

This led the Australian Transport Safety Bureau, who headed up the search for MH370, to suggest that a catastrophic event on the aircraft such as oxygen starvation might have caused those aboard to become incapacitated.

It would then have continued flying on autopilot until the fuel finally ran out.

Earth Nearly Lost All Oxygen And Could Have Suffocated 2.3 Billion Years Ago
Here’s Why Our Brains Solve Problems by Adding Things, Not Removing
AI Is Not Actually an Existential Threat to Humanity, Scientists Say
Scientists Warned Us The Pandemic Wouldn’t Solve The Climate Crisis. Guess What
Early Humans Walked Upright While Still Having Surprisingly Simple Brains