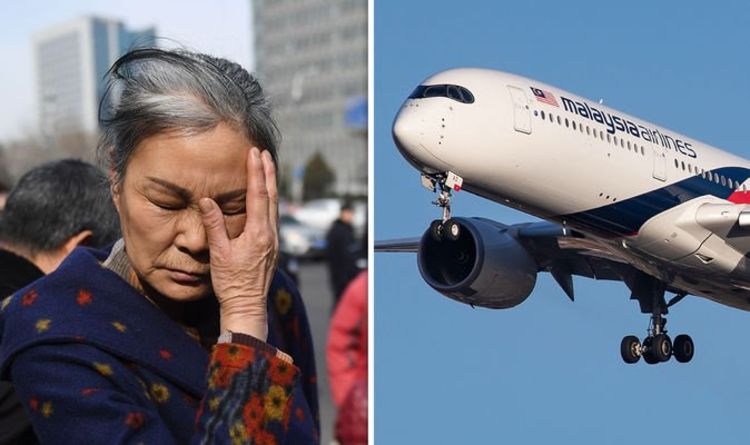 
Malaysia Airlines flight 370 went missing on March 8 2014 en route from Kuala Lumpur to Beijing carrying 239 people. Carey Walker from the US believes she has uncovered evidence that the plane was actually shot out of the sky. She said the devastating attack on the plane is “unmistakable” in the images.

“The airliner was shot down immediately after signing off with Malaysian airspace.

“Extremely heavy missile fire from all sides is unmistakable in the images.

“The attack is horrendously extreme for one aeroplane.”

Ms Walker, who reports to be a former unit manager of a “major transportation hub” in the US, said she has been looking at satellite images for years, making it easier to identify what is in the videos.

She claims to have used enhancement software, which revealed “gruesome” images.

Ms Walker believes a fleet of ships and submarines opened fire on the plane “for hours”.

She said: “An entire flight of ships and subs fire hundreds of missiles for hours even after the plane is down, apparently as an attempt to completely destroy any large pieces. It is literally overkill.”

She said she believes it may have been part of a training mission to test “newly updated subs and warships”.

Ms Walker alleged that she has filed a report with the Australian Transport Safety Bureau, but has not heard back.

She also claims to have been ignored by the Malaysian authorities.

Ms Walker dismissed claims that data indicated the plane flew on for many more hours over the Indian Ocean, saying: “The flight data after contact lost is all wrong.”

The images Ms Walker is referring to were found on weathergraphics.com/malaysia.

She said: “It is hard to see at first with untrained eyes, but once you do, you start to see shapes and objects and missiles will all their contrails – it gets clearer and clearer.”

She added: “It is definitely an attack with explosions happening, and what a coincidence it is 100 percent during the time of the plane disappearing.

“The odds of it not being connected are too slim to consider.”

Here’s How You Can Watch SpaceX’s Historic First Launch of NASA Astronauts Live
Astronomers Just Narrowed Down The Source of Those Powerful Radio Signals From Space
Scientists Have Used Fast Radio Bursts to Find The Universe’s Missing Matter
Almost a Dozen Earthquakes Recorded in Clusters Near Yellowstone Park in Just 24 Hours
This Clever Ocean Power Station Harvests Wind, Wave And Solar Energy on One Platform