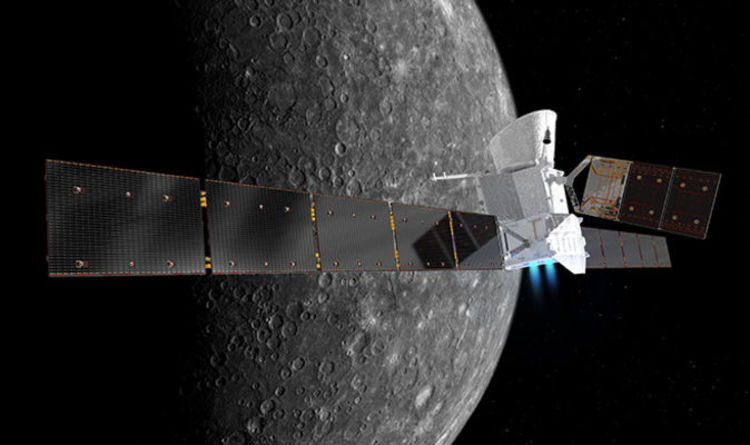 Taking seven years to reach the planet closest to the Sun, the challenges are formidable – but Joe Zender, deputy project scientist with ESA, said the potential rewards were likewise enormous.

He said: “Mercury is the least understood rocky planet.

“If we look at the origins of the other planets in our solar system, we have an idea of how they formed.

“There is one exception – Mercury, which does not fit with our model.

“It’s a mystery – it does not fit with our current understanding.”

Bepicolombo – named after Italian mathematician Giuseppe “Bepi” Colombo, who died in 1984, will be taken into space by an Ariane 5 rocket which will be launched from the ESA’s base in Kourou, French Guiana – with Mr Zender and his colleagues facing an anxious wait until then.

It will take the BepiColombo spacecraft into orbit around Earth, the first stage of a five billion mile journey to Mercury which will take seven years.

Mr Zender said the probe will study the structure and evolution of Mercury, which previous NASA missions have suggested the planet has a molten core far larger than Earth’s.

He said: “If we look at the densities of planets, Mercury is much too dense for where it is, according to what we know.

“It also has an atmosphere and a magnetosphere.

“It reveals a huge gap in our understanding.”

Mr Zender said the journey to Mercury was difficult because of the enormous gravitational pull of the Sun.

In order to compensate for this, ESA scientists will attempt to reduce its speed by performing “slingshots” around the Earth, Venus and Mercury itself.

And crucially, the spacecraft is fitted with four T6 ion thrusters, fuelled by the inert gas xenon, which were designed and built right here in the UK by QinetiQ at its base in Farnborough.

Mr Zender said: “They are masterpieces of engineering.

“What is really new is the way that they use ion propulsion.”

Nor is this the only British involvement. Aerospace company Airbus is responsible for the systems design and building of the mission’s Mercury Planetary Orbiter (MPO), which will study the planet’s surface and internal composition; the Mercury Transfer Module (MTM), providing solar-electric propulsion on the trajectory to Mercury; and MOSIF, the sunshield which will protect it from the colossal temperatures it will face at it approaches the Sun.

Assuming all goes well with the launch, Bepicolombo should start getting data by April 2026, so Mr Zender is facing a long and anxious wait for news.

He said: “Tomorrow’s a big moment but it is exciting.

“This is a chance to do some tremendous science.”