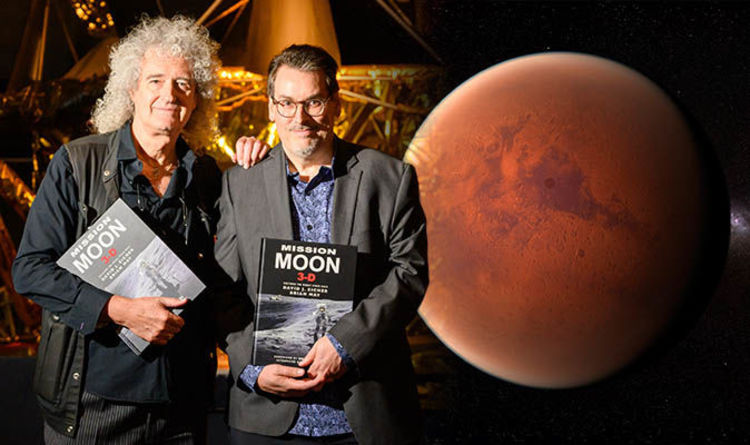 The veteran rockstar and astrophysicist believes the next golden age of space exploration could focus on the planet Mars.

Mr Eicher agreed the potential for future discovery is untapped but relies on international cooperation and not rivalry.

Both space experts spoke to Express.co.uk before the launch of their latest book Mission Moon 3D – the world’s first ever book on the space race in stereoscopic 3D.

Coinciding with the book’s launch is the 50th anniversary of the Apollo space program, celebrated by NASA from October this year through to December 2022.

Looking back at the history of the US Apollo and Soviet programs, their astronauts and engineers, the space experts also expressed a hope in renewed interest in space and sending humans to the surface of the red planet.

Mr May and Mr Eicher, who both remember the Apollo 11 Moon landing on July 20, 1969, said humans have not even begin to fully comprehend the scale of potential discovery when considering the cosmos.

They argued a new beginning could be at hand if resources and commitment are pooled together.

So far, we have only stepped out onto our “doorstep”, the Moon, and Mars could be the next stepping stone towards the stars.

Mr Eicher said: “I think this shows you if you have the will and work together you can do pretty much anything as humans that you set out to do.


The next chapter of human exploration, well, I guess that will be Mars

“That’s what we hope the future will be – a little more cooperative in exploring the universe, because one little moon, one little planet and one little solar system, of which there are 400 billion in the Milky Way and there are 100 billion galaxies at least, it’s an enormous universe and to further explore it we will need to work together in the future.”

And that is only the observable universe, Mr May added, saying there is much more to explore further out there.

However, before humans can go to Mars, there is still a lot to be learned from the discoveries made during the second half of the 20th century.

The images, which were shot using stereoscopic principles and have never been published in book form, create an enthralling 3D visualisation of the space race.

Three-dimensional stereoscopy creates an illusion of depth from two images taken at different angles when viewed through a pair of specialised goggles – an effect which has fascinated Mr May from childhood.

The photographs in the book were meticulously selected by Mr May’s company The London Stereoscopic Company and Mr Eicher wrote the book’s historical narrative.

Mission Moon 3D spans the entire length of the space race, from the Russian Sputnik satellite to the modern era of space exploration, the International Space Station and decades worth of unmanned space probe launches.

Jim Lovell, commander of the doomed Apollo 13 flight, and Apollo 16 astronaut Charlie Duke both contributed to the book.

Mr Duke, who features on the cover of the book, even made a guest appearance during the book’s launch to answer questions from an audience of space enthusiasts.

In his foreword to Mission Moon 3D, the astronaut said: “I hope the story of these fascinating times, in which humans took their first steps out into space, along with these amazing and unprecedented images, will entertain you for a long time.”

Mr Lovell said: “I hope this book – with David J Eicher’s brilliantly evocative text and Brian May’s sensational stereo pictures – will give you something of the experience of those days of the space race to the Moon.

“May we explorers live to see another great age of discovery of this magnificent universe we live in.”

Mission Moon 3D, by Dave Eicher and Brian May, published by the London Stereoscopic Company, £30, is out now.

The FDA Just Approved The Most Expensive Drug in The World : ScienceAlert
The Cause of Alzheimer’s Could Be Coming From Inside Your Mouth : ScienceAlert
‘SuperGPS’ Technology Accurately Pinpoints Your Position Within Inches : ScienceAlert
Volcanoes May Have Transformed Venus Into a Blistering Hellscape : ScienceAlert
Octopus Brains Evolved to Share a Surprising Trait in With Our Brains : ScienceAlert