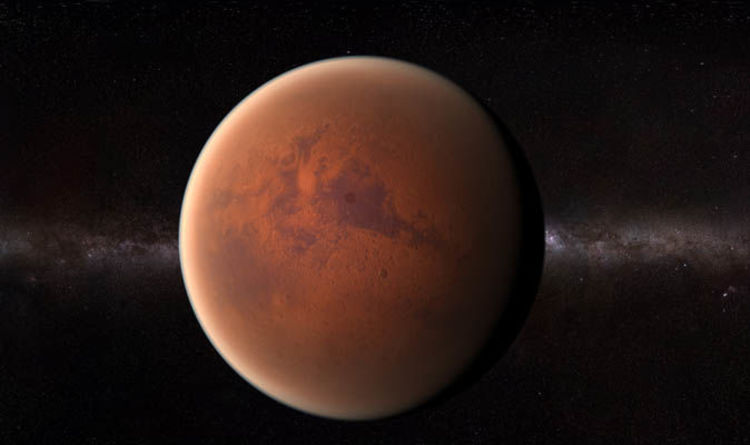 
Skywatchers are in for a celestial treat as Mars draws in later on tonight, peaking on its closest orbit just before sunrise Eastern Time.

NASA says the space event means Mars will appear “super bright and with its orange-red color, will be hard to miss in the nighttime sky”.

Mars will be at its closest point at 4am ET whereas for viewers in the UK, it will be at 9am.

What is the distance between the Earth and Mars?

Tonight Mars will be 35.8 million miles from Earth, a distance NASA describes as a “close approach”.

This is the second nearest approach the Red Planet has made since 2003 when it travelled to within 34.6 million miles of our planet.

During that year, the distance between the two was the nearest it had been in almost 60,000 years.

And Mars will not get this close again for a long time – 2287 to be exact, meaning this really is a once-in-a-lifetime night spectacular.

However there will be one viewing opportunity in October 2020 when the distance between the two will measure 38.6m miles.

What is the closest Mars can get to Earth?

NASA says the the smallest possible distance between our two planets is 33.9m miles.

The reasons for the variations can be explained by the elliptical orbits of both Earth and Mars.

This simply means they are oval and not in a perfect sphere so as they tilt towards one another, the close approaches vary in size.

How can you watch tonight?

Bruce McClure of EarthSky says Mars should be easily visible to the naked eye for those watching.

He says “Mars is out almost all night long now. It look like a bright reddish ‘star’, shining with a steadier light than true stars.”

Avoid light pollution to maximise your chances and look through a telescope.

If clouds prevail, do not worry as NASA will be live-streaming the whole thing from the Griffith Observatory in Los Angeles.

A Robot on Mars Detected The Tremors of Meteorites Hitting The Red Planet : ScienceAlert
A New FRB Signal Has Buzzed Nearly 2,000 Times in Just Two Months, Raising a Mystery : ScienceAlert
Why House Fly Barf Is an Overlooked Potential Vector of Disease : ScienceAlert
A Stunning New 3D Model of The Cat’s Eye Nebula May Help Us Solve Its Mysteries : ScienceAlert
We Have Our First Look at Neptune’s Rings in 33 Years, And They’re Glorious : ScienceAlert