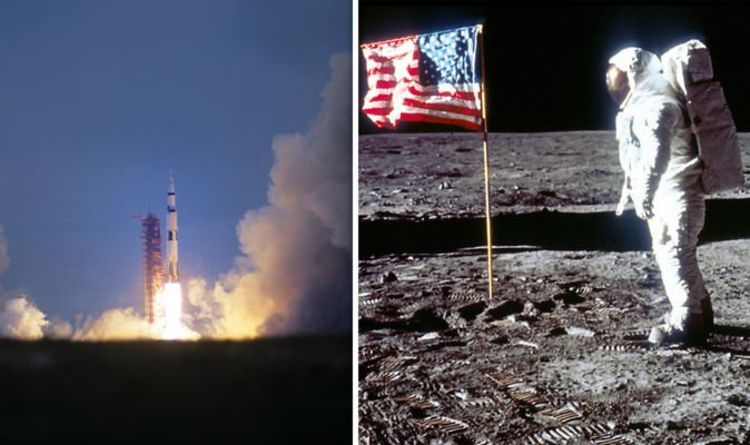 
In 1969, NASA made history when it sent Michael Collins, Buzz Aldrin and Neil Armstrong to the Moon, with the latter two becoming the first people to step foot on the lunar surface. However, one man who played a key part in the mission believes the whole thing WAS FAKED so NASA and the US could turn a profit. Bill Kaysing was head of technical publications for Rocketdyne – the company which helped to build the Saturn V rocket which launched the Apollo 11 crew – and he believes NASA never sent anyone to the Moon.

Mr Kaysing, who died in 2005 at the age of 82, began asking questions of the authenticity of the Moon landing shortly after the mission and by 1976 he published a book called ‘Never Went to the Moon: America’s Thirty Billion Dollar Swindle’.

In his book, Mr Kaysing established a list of reasons why NASA never took astronauts to the Moon.

He believed the space agency simply did not have the technical expertise to put man on the Moon.

Mr Kaysing also claims that the photographic evidence does not stack up for the space agency, claiming that there were no craters near the lunar landing module.

He wrote in his book: “In all NASA animation of lunar flights, there is shown craters being created below the lunar landing module by the jet blast of the landing engine.

“In every official NASA photo of the lunar landing module on the moon, there are not craters. In fact, the surface looks completely undisturbed!”

What Mr Kaysing believes happened is that NASA sent the astronauts into orbit, much like the International Space Station (ISS) is, and returned them after eight days.

He said in a 2001 TV documentary ‘Conspiracy Theory: Did We Land on the Moon?’: “The astronauts were launched with the Saturn V.

“Then, in order to account for their disappearance, they simply orbited the Earth for eight days and in the interim they showed these fake pictures of the astronauts on the Moon.

“But on the eighth day the command console separated from the vehicle and descended to Earth as, of course, was shown in the films.”

However, Mr Kaysings’ claims have been largely dismissed, with Jim Lovell, an astronaut who flew to and orbited the Moon in 1968, calling him “wacky”.

Mr Lovell said: “The guy is wacky. His position makes me feel angry. We spent a lot of time getting ready to go to the Moon. We spent a lot of money, we took great risks, and it’s something everybody in this country should be proud of.”

Bacteria Can Use Plastic Waste as a Food Source, Which Isn’t as Good as It Sounds : ScienceAlert
Mysterious ‘Zone of Uncertainty’ Inside The Brain Reveals a Surprise : ScienceAlert
Babies May Not Be Born With a Microbiome After All, Scientists Say : ScienceAlert
People Who Don’t Exist Look More Real Than Actual People, Study Finds : ScienceAlert
Sword Mistaken For Replica Is Actually An Ancient 3,000-Year-Old Weapon : ScienceAlert