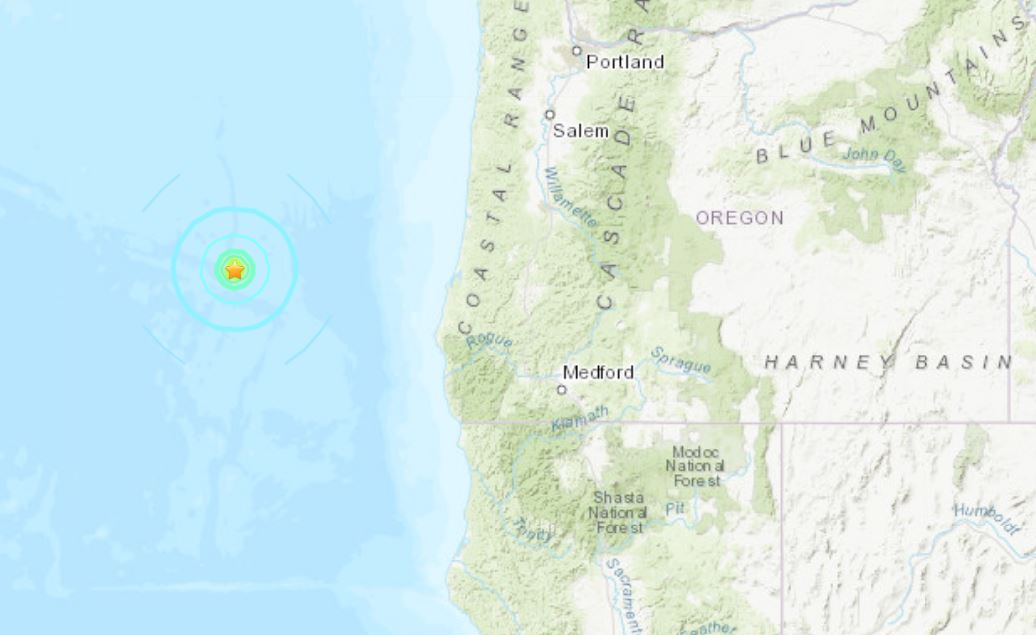 That is right on the Cascadia Subduction Zone!

Although pretty far from the coast, 9 reports of feeling tremors have been uploaded to the USGS website.

The San Andreas Fault is so famous it’s the star of a movie. But the San Andreas fault’s nearest neighbor, the far more dangerous Cascadia subduction zone has remained obscure, ignored, and denied.

Not only is the next Cascadia earthquake overdue, but the buildings and infrastructures of the cities it will hit along the coastline — including Portland and Seattle — are nowhere near ready for it.

What is the Cascadia subduction zone?

Also known as “the mega-thrust zone,” the Cascadia subduction zone is a 700-mile fault line below the floor of the Pacific Ocean, stretching from Cape Mendocino, Calif., to Vancouver Island, Canada.

The fault line parallels the Cascade Range of volcanic mountains that run about 100 miles inland from the shoreline, starting in Northern California and ending in British Columbia, Canada.

In the Cascadia subduction zone, one tectonic plate — the 90,000-sq.-mile Juan de Fuca — is sliding underneath North America, and the volcanic mountains of the Cascade Range mark the line where the Juan de Fuca plate is heating up and melting everything above it.

This is causing the stuck edge of North America — namely, the Pacific Northwest region — to bulge at a rate of three to four millimeters annually, and to compress eastward at 30 millimeters to 40 millimeters as well.

What kind of damage could the Cascadia mega-earthquake and tsunami produce?

If “the very big one” hits, the Pacific Northwest region will drop by as much as 6 ft. and then rebound 30 ft. to 100 ft. westward.

A colossal amount of the ocean will be displaced, sending waves rushing westward, toward Japan and eastward looking like a 700-mile liquid wall that will reach the Northwest coast, on average, 15 minutes after the earthquake begins.

Where will the earthquake’s greatest impact be?

“Everything west of Interstate 5 will be toast,” said a Federal Emergency Management Agency (FEMA) official.

If that was Portland, let’s just say I would rather not be here.

On the West Coast, Interstate 5 cuts through several Pacific Northwest cities, including Portland, Eugene, Salem and Medford in Oregon and Olympia, Tacoma and Seattle in Washington.

The total population of the region, which covers approximately 140,000 sq. miles, is about 7 million.

FEMA already has plans to provide shelter for 1 million displaced people, plus food and water for another 2.5 million people.

And if the event takes place during the summer, when the beaches are full of vacationers, the casualties could be off by a horrifying margin.

How likely will the next Cascadia earthquake happen in the next 50 years?

It’s easy to do the math. The last Cascadia earthquake and tsunami occurred on January 26, 1700.

In the past 10,000 years, geologists have determined, the Pacific Northwest has experienced 41 Cascadia-subduction-zone earthquakes.

It’s now 319 years since the 1700 earthquake. That means the next Cascadia earthquake is overdue.

Also, in 2010, Oregon State University geologist Chris Goldfinger told the Associated Press, “There is an 80 percent chance the southern end of the fault off southern Oregon and Northern California could break in the next 50 years and produce a Megaquake.”

Caltech simulations show that mega-quakes — characterized as such because they last for more than four minutes, reach a magnitude of 9.0 or more and are dominated by low-frequency motions — would be exacerbated by the geography of the Seattle basin.

This could cause severe damage among older high-rises built before building code changes made as a result of the 1994 Northridge earthquake… particularly steel-framed buildings with outmoded ‘brittle welds.’ Newer buildings have been constructed to more rigorous structural standards.”

In addition buildings that are built in accordance with newer building codes are certainly the safest, but older buildings need to be seismically reinforced in order to provide the proper measure of safety.

There is no such thing as an earthquake-proof building, but our technology is at a place where we truly can prevent the collapse of buildings and the loss of life.

Are you prepared for the next Big Cascadia earthquake? Get ready right now!

High-Fat Diets May Break The Brain’s Ability to Regulate Calories : ScienceAlert
Scientists Discover a Weird New Form of Ice That May Change How We Think About Water : ScienceAlert
Ultra-Processed Food May Exacerbate Cognitive Decline, New Studies Show : ScienceAlert
Incredible ‘Fairy’ Robot Sails on The Breeze Like a Floating Dandelion : ScienceAlert
No One Likes Commutes, But They May Actually Be Good For Mental Health, Study Finds : ScienceAlert