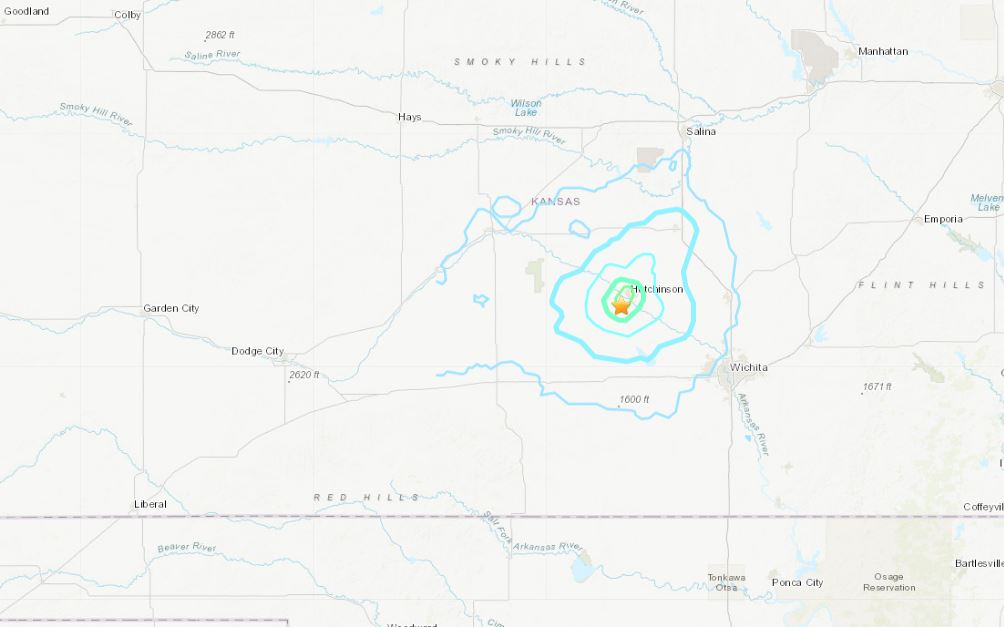 The temblor occurred about three miles west-southwest of South Hutchinson at 7:59 a.m at a depth of 3.1 miles and was followed by three smaller quakes, the largest being a M3.1.

There were no immediate reports of injuries, but Hutchinson Public Schools and others reported on social media that there was some minor damage.

The district said some of the damage included loosened ceiling tiles, cracks in a couple of walls and a door that wouldn’t close.

So far no reports of injuries have been made.

Around 1000 people have reported feeling the quake on the USGS website.

“My wife is reporting damage on Hutch main street. She ran outside afraid the building would collapse…this was HUGE.”

“Window fell out on main Street in hutch.”

“Caused damage to Dillions on 5th in Hutchinson.”

About 3 hours later, a M5.4 earthquake hit right on the Juan de Fuca Plate off Oregon at a depth of 6.2 miles (10 km). No tsunami warning.

Less than a week ago I was writing that the Cascadia subduction zone is a giant fault off the coast of the Pacific Northwest, where the Juan de Fuca tectonic plate plunges under the North American plate, building strain throughout the region and prompting fears of ‘The Big One’ when it explodes.

And right below central Oregon, it appears that a chunk of the Juan de Fuca plate is missing. And we certainly would like to know how it may affect the surface or even if it may help building the overdue Cascadia Earthquake.

In a new geological study of the region, geoscientists have suggested that the missing piece is not just a hole, but a giant crack that is splitting the plate apart at least 93 miles beneath the surface. In other words, the Juan de Fuca plate is dying under central Oregon. There’s maybe a link there?

In any cases, today, the US is shaking and rumbling with another significant quake for Montana in Manhattan, again, after the 5th of August.

JWST Has Found Life’s Elemental Building Blocks in The Depths of Darkest Space : ScienceAlert
People Who Don’t Exist Look More Real Than Actual People, Study Finds : ScienceAlert
There’s a ‘Lost City’ Deep in The Ocean, And It’s Unlike Anything We’ve Ever Seen : ScienceAlert
Study of 500,000 Medical Records Links Viruses to Alzheimer’s Again And Again : ScienceAlert
Babies May Not Be Born With a Microbiome After All, Scientists Say : ScienceAlert