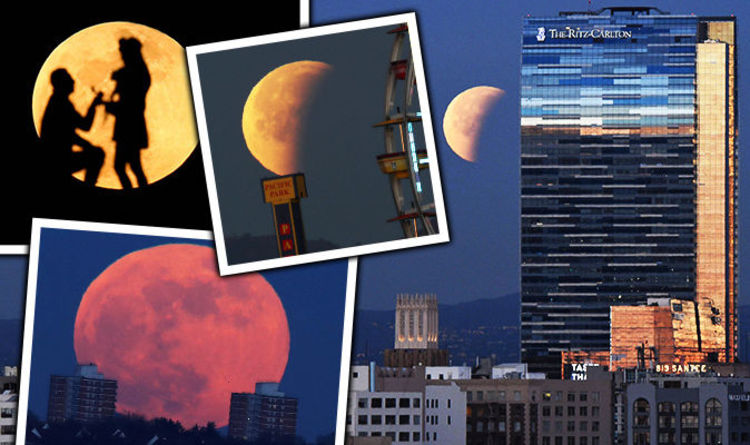 
The rare ‘lunar trifecta’ turned the moon into a glowing crimson orb, providing a mesmerising companion to famous world landmarks in thousands of images.

Stunning pictures showed a silhouetted cable car in front of the setting sun in Singapore, where the lunar eclipse started at 6.51pm followed by moonrise at 7.11pm.

In the city of Edirene, Turkey, a gorgeous luminous globe rose above the pillars of the Ottoman imperial Selimiye Mosque.

Lancelin, Australia – which enjoyed some of the best views – saw skywatchers being captured in silhouette against a large shining supermoon.

A full moon was also captured in Los Angeles, California, another part of the world lucky enough to see a full total lunar eclipse.

In western North America, the eclipse began at 3.48am PT (11.48am GMT) but residents on the East Coast, USA, were less fortunate as the moon had set before the eclipse had moved into totality, according to NASA.

But this didn’t dim wonderful pictures caught by professional and amateur snappers.

The Statue of Liberty was one of several familiar landmarks outshone by the super blue blood moon’s beauty.

Photojournalist Gary Hershorn tweeted: “The super blue blood moon is eclipsed as it sets at sunrise next to the Statue of Liberty in New York City this morning. #newyork #newyorkcity#nyc @nyc @agreatbigcity #LunarEclipse #SuperBlueBloodMoon @statueellisnps”

What is the Super Blue Blood Moon?

As with all total lunar eclipses, the moon takes on a reddish tint while in the Earth’s shadow giving it the name blood moon.

Today’s celestial display was so epic because of two other factors.

January 31 was the third in a supermoon trilogy, following one in December and a ‘Wolf Moon’ supermoon on January 1.

A supermoon occurs when a full moon is at its closest distance to Earth on its orbit making it seem 30 percent bigger and 14 percent brighter than it normally would.

Today’s supermoon was also a blue moon, the name given to a second full moon in a calendar month.

NASA showed a live stream of the entire celestial spectacle on NASA TV, running from 10.30am GMT time.

Stargazers in the UK weren’t fortunate enough to see the total lunar eclipse but they still have a chance to see the blue moon tonight.

Wet weather has been forecast across parts of the UK and Ireland for tonight but Mr Burkil says there should be “clear breaks in the skies even amongst the showers”.

He added: “Even if you go out and have cloudy skies don’t give up hope – you may be able to get a good view later in the night.”