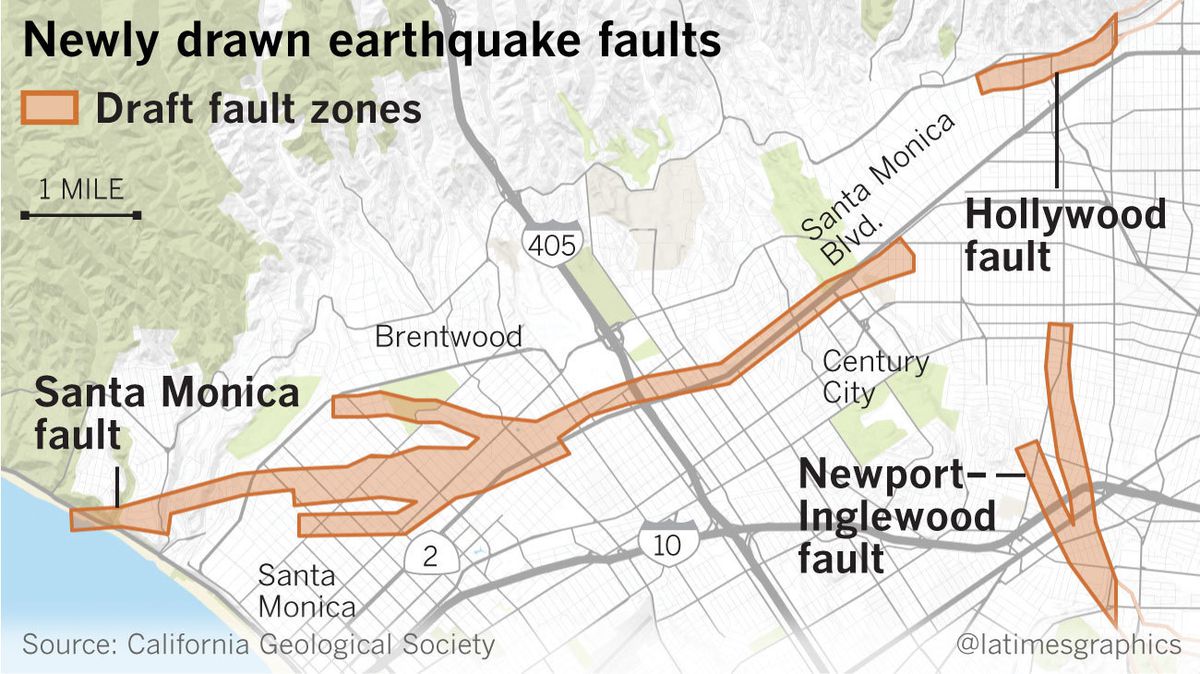 
The San Andreas Fault in the Southern California desert gets most of the local earthquake press and the starring roles in summer blockbusters.

But scientists are getting better at mapping the fault lines beneath Los Angeles that have the potential to inflict as much — if not more — devastation.

A hypothetical Big One epicentered on the San Andreas Fault would be felt throughout LA, and damage would be widespread. But the strongest shaking would be felt 30 to 80 miles away from LA city limits.

In comparison, a M7.5 earthquake epicentered on the Puente Hills Thrust near Downtown could kill 3,000 to 18,000 people — many more than the estimated 1,800 that would be killed by the San Andreas scenario. Ground shaking would be so violent, it would launch objects into the air.

In recent years, the California Geological Survey has more precisely mapped dozens of faults throughout the city, and the state has stepped in to mandate that new fault maps be created in areas where construction has increased.

Those discoveries are also changing the way that LA prepares for earthquakes, says Mona Curry, an emergency manager for the city. For the last four years, Curry has coordinated annual drills for the city of Los Angeles that use one of those in-basin earthquakes as a scenario, with government agencies working with military leaders to practice their response to the disaster.

There are still faults under LA that scientists haven’t found yet. When a M6.7 earthquake erupted in Northridge 25 years ago this week, it was on a fault scientists didn’t know existed. Centuries of human habitation have in many cases paved over visible geological signs of faults below.

“The odds that there’s an undiscovered fault somewhere in the greater Southern California area that could produce a magnitude 6.5 earthquake are pretty good,” said UCLA professor of geotechnical engineering Jonathan Stewart.

Here’s how LA could be disrupted by potential quakes on five known local faults — and how leaders are preparing for the worst.

New maps made of the Santa Monica Fault in the past year not only show the potential of a more powerful quake, but also a longer fault zone, extending from Santa Monica past UCLA’s medical center and close to the Cedars-Sinai medical complex, putting them at risk.

An offshore fault that mostly travels along the Orange County coast, the Palos Verdes Fault runs aground right through the Port of Los Angeles.

In 2017, the USGS gave a report on a hypothetical M7.3 earthquake on the Palos Verdes Fault that would deliver a “direct hit” on the port, estimating that it would kill 200 people and decimate over 2,000 buildings.

Additionally, the port sits in a liquefaction zone, with operations which are largely built on artificial land.

An earthquake here would create a major disruption in the movement of goods — including food and medical supplies — for the entire U.S since about 20 percent of all the country’s cargo comes through the Port of LA.

“They have a plan,” says Curry, of the port, which conducts its own drills. The city has also recently focused on retrofitting the port by pumping cement below its vulnerable structures.

LA is dotted with refineries, pipelines, and active oil fields. In 2017, it was found that the Newport-Inglewood Fault could work together with the nearby Rose Canyon Fault to create a quake as large as M7.5, affecting a trail of oil and gas facilities including the Inglewood Oil Field, the Alameda Corridor, and fuel storage at LAX.

The concern when fuel is scarce goes beyond making sure gas stations are open, says Curry. “How do you prioritize who gets the fuel?”

For drivers, electric vehicles (EVs), powered by solar panels distributed throughout the city, could eliminate a lot of those concerns—Curry herself has a plug-in electric vehicle. The city is also thinking this way, which is one reason why Los Angeles has the largest EV fleet in the country.

Discovered in 1999, the Puente Hills Thrust might be the most feared fault in the city of LA.

A hypothetical earthquake here epicentered south of USC was called the “worst case for Los Angeles” in a 2017 city report. Not only does it travel through densely populated Downtown and Hollywood, a fault thrust is different than the more common slip-strike fault in that it moves at an angle, diagonally instead of horizontally.

This is one reason the city’s emergency operation center (EOS), which is a few blocks east of City Hall, is designed to withstand an 8.0, as is City Hall. Still, all city departments have plans to work remotely or use alternate worksites, says Curry. If it’s safe for her to do so, she’s prepared to work from home.

This relatively new fault runs through neighborhoods with high landslide risk, including much of the Hollywood Hills. If a major earthquake happens here, some residents will likely have their driveways and canyon roads cut off to vehicle access. If certain major streets or passes are closed for a few weeks, the most reliable way to get around might be underground rail lines like the Red Line.

This is why I recommend having multimodal evacuation options and enough food and supplies to stay put for several weeks. In my mind, I’m personally thinking about three months. How can you shelter in place? How can you purify water? It pays to be prepared.