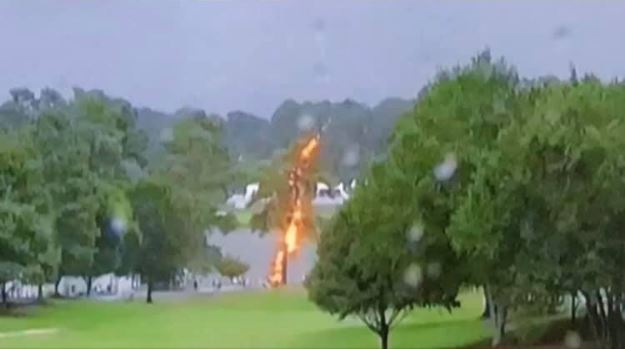 The strike happened at the course near the 16th tee. The golf club is currently hosting the PGA TOUR Championship, the final of the FedEx Cup.

Just three days after a lightning strike killed 5 and injured more than 150 people in Poland, another bolt almost ended up deadly in Atlanta during a PGA Tour Championship, injuring six.

As reported by KVUE:

Officials suspended play around 4:17 p.m. The strike occurred around 4:45 p.m.

Frist reports say none received life-threatening injuries. DeKalb County officials said the youngest victim is 12 years old. The child was also the one with the most significant injuries. The rest of the victims were adults.

There were six fans injured on site during a lightning strike. Our latest report is that their injuries do not appear to be life-threatening. Play is suspended for the day, and will resume Sunday at 8 a.m. ET. https://t.co/Nh5R7q9tuC

Play has since been suspended for the day due to the weather and will restart at 8 a.m. on Sunday.

The Associated Press reports lightning struck a pine tree right after play was suspended. The majority of the injuries may have actually been from debris flying off of the tree.

It was the third round of the TOUR Championship and the final round was originally scheduled for Sunday. When play was suspended, Justin Thomas was in the lead at 12-under for the tournament.

The report comes as storms moved across the region causing severe thunderstorm warnings in north Georgia and parts of metro Atlanta.

Injuries from lightning on Eastlake. Lightniing near 16th tee on the golf course at that time. #11ALIVE pic.twitter.com/8BZGH90KLA

Neither Atlanta nor DeKalb County was under a Severe Thunderstorm Warning at the time. However, 11Alive Meteorologist Samantha Mohr reported a heavy storm moving over through with multiple lightning strikes.

I did not know golf could be that dangerous 😉

UFO sighting: ‘Fleet of alien craft’ spotted over Arizona – WATCH shock video
Nostradamus prediction: Coronavirus in prophecy of scourge and plague in China? | Weird | News
Nuclear Fusion Startup Claims It’s on The Way to Providing ‘Unlimited’ Energy
SpaceX Just Announced They’ll Send Space Tourists Deeper Into Orbit Than Ever Before
There’s a Simple Sustainability Hack Anyone Can Use in Their Shower