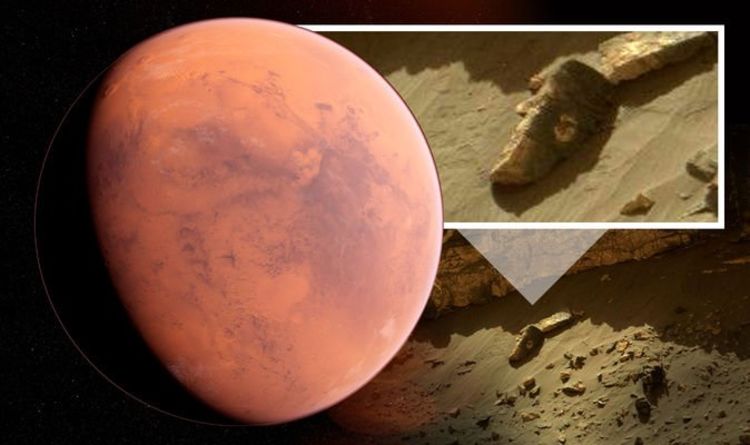 
Well-known alien conspiracy theorist Scott Waring made the shocking claims about the intriguingly-shaped Mars anomaly on his etdatabase.com blog. He said: “I found this amazing side view of a face in a Mars GigaPan photo today.

“The detail is fantastic and the ear, nose, eye and forehead all have great detail to the carving.”

Apparently lying on a sand-strewn hill, the object’s dimensions do appear to approximate a humanoid head.

The sandy-coloured shape has a tapered tip, resembling a chin.

A prominently jutting section towards the top could easily be mistaken for a forehead.

The image’s metadata indicates the object was photographed on November 23, 2015, by NASA’s Mars Opportunity Rover.

The self-proclaimed UFO researcher believes he is performing an important service by searching for faces among the Red Planet’s rubble.

Mr Waring said: “It shows us who they were, what they looked like, who they admired, if there are males and females of the species and much more.

“Discovering life elsewhere in the universe would answer the deepest most complex unanswered question of science.

“One carving in stone of an alien face solves this greatest question of science.

“As Saint Magnus Albertus states: ‘Do there exist many worlds, or is there but a single world?

“’This is one of the most noble and exalted questions in the study of Nature.’”

The discoveries of “faces” on Mars is nothing new.

In 1976, NASA’s Viking 1 spacecraft was scouting out a potential Mars landing site for its sister spacecraft, Viking 2, when it came across something unexpected.

While the spacecraft was acquiring pictures of a region of the planet called Cydonia, Viking 1 captured what looked like an enormous human face staring up at it.

The “face” measured nearly two miles across and had what looked like deep-set eyes and a clearly delineated nose and mouth.

The media was quick to sensationalise the image, describing it real evidence of life on Mars.

Despite the apparent clarity of the “face”, NASA was quick to explain away the image as nothing more than an optical illusion.

Two Black Holes Met by Chance, And It Created Something Never Seen Before : ScienceAlert
Crocodiles Seem to Be Thriving in a Toxic River That’s More Like a Sewer. Here’s Why : ScienceAlert
These Mysterious Fungi Belong to an Entirely New Branch on The Tree of Life : ScienceAlert
Mysterious Changes Identified in The Brains of People Who Get Migraines : ScienceAlert
Scientists Revived Ancient ‘Zombie Viruses’ Frozen For Eons in Siberia : ScienceAlert