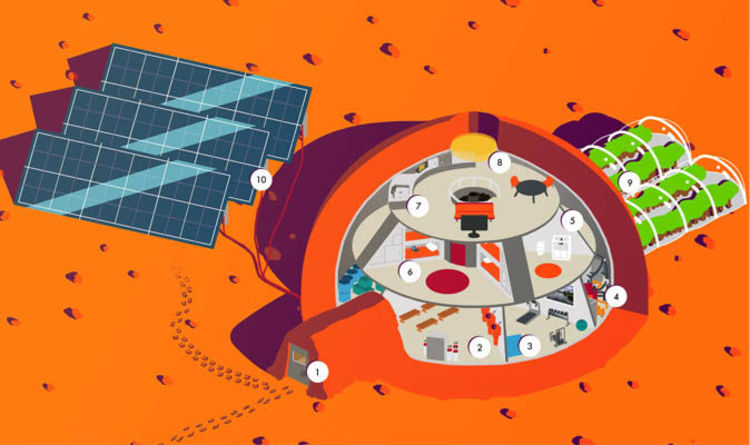 
NASA and SpaceX are racing each other to Mars while astrobiologists and architects face the challenge of keeping astronauts safe when they reach the Red Planet.

Advancements in technology mean permanent bases on Mars are becoming a “plausible reality” but also an incredibly daunting task to accomplish.

The unforgiving surface conditions of the Red Planet means human colonists will have to live and sustain themselves in enclosed bubbles, surrounded by 10ft of Martian dirt.

Professor Lewis Dartnell, an astrobiologist at the University of Westminster, and interior specialists at Hillarys have designed a Martian habitat of the future.

Tara Hall, a spokeswoman for Hillarys, told Express.co.uk: “The idea of commercial space travel has been a hot topic for a number of years now.

“Just over 10 years ago we saw the launch of Falcon 1 – in that time there has been enormous progress made in the field and now the idea of reaching Mars doesn’t seem so far-fetched as it once did.

“This research project sheds light on what this would actually mean for the ordinary person.

“We can see that setting up a long-term base on Mars is certainly more plausible that you might think, which is a really exciting prospect.”

Professor Dartnell and Hillarys designed the so-called “Home on Mars” – an interactive online project detailing the everyday realities of living on Mars.

The surface of Mars might seem similar to Earth in that is it rocky and rugged, but the planet is an inhospitable world with a barely present atmosphere.

Because of this, any Martian habitat will have to be an air-tight structure with airlocks keeping the internal pressure and oxygen at manageable levels.

Astronauts will only be able to leave the habitat while wearing a pressurised spacesuit.

The Mars structure would be covered in a thick layer of dirt to fend off radiation, sub-zero temperatures and storms.

Mars astronauts will have to be resourceful when it comes to food and water as nothing can grow on the Red Planet.

Their most likely source of nutrition would come from insects and a vegan-based diet – all grown in a connected greenhouse farm.

Another major problem would come in the form of boredom.

All signals to and from Mars take approximately 40 minutes to travel through space, making real-time communication with loved ones back on Earth impossible.

Professor Dartnell said: “Humanity will venture out through the solar system probably sooner rather than later, and Mars is the most enticing location to move house.

“To survive on the Red Planet, Martian houses will have to look a lot like what we’ve depicted in this project.

“But although living on Mars may sound exciting, would you want to spend most of your days indoors and not able to phone your friends and family back on Earth?”

You can explore the Martian habitat of the future in greater detail by clicking here.

The US Navy Put Cameras on Dolphins And The Results Are Wild : ScienceAlert
This Seemingly Simple Foot Feature May’ve Allowed Sauropods to Become Giants : ScienceAlert
Scientists Say ‘space Bubbles’ Could Shield Earth From The Sun, But Would It Work? : ScienceAlert
A Snake-Lover Built Robotic Legs For a Snake, and It’s Insane : ScienceAlert
Why Do Kids Get Worms, And What Can You Do to Prevent It? : ScienceAlert