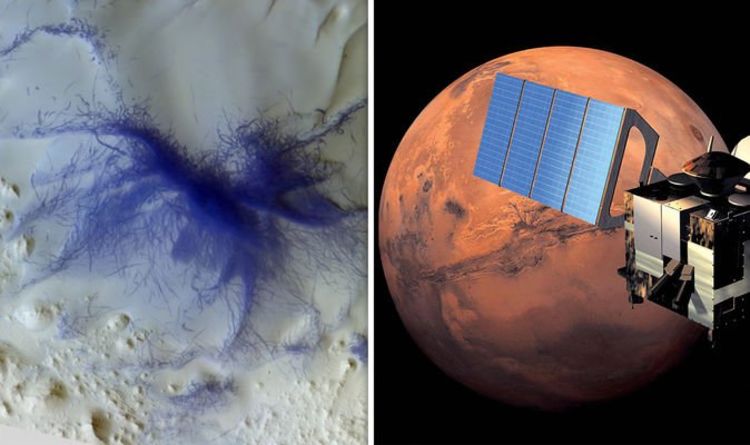 
The ESA-Roscosmos ExoMars Trace Gas Orbiter captured the image on February 8 in Mars’ Terra Sabaea region. Using the spacecraft’s Colour and Stereo Surface Imaging System (CaSSIS), scientists uncovered the blue phenomenon on the Martian surface. The photo was shared on the ESA’s Twitter, where followers questioned if it was “life on Mars?”, but the space agency released a statement revealing its true origin.

The so-called spider is actually a sprawling pattern left behind on a ridge by a frenzy of dust devils, where hundreds or even thousands of whirly tornadoes formed.

The statement read: “This remarkable image was taken in the Terra Sabaea region of Mars, west of Augakuh Vallis, by CaSSIS onboard the ESA-Roscosmos ExoMars Trace Gas Orbiter.

“This mysterious pattern sits on the crest of a ridge and is thought to be the result of dust devil activity – essentially the convergence of hundreds or maybe even thousands of smaller Martian tornadoes.

“This image is a colour-composite representation where features that are bluer compared to the average colour of Mars are shown in bright blue hues.

“In actual colour, the streaks would appear dark red. Dust devils churn up the surface material, exposing fresher material below.”

It is unknown why so many dust storms form along this ridge, though it may be to do with the region’s mountains impacting the flow of air.

The ExoMars orbiter, which launched in 2016, also captured a photo of NASA’s InSight lander on March 3.

InSight appears as a small, white speck inside a darker circle of rock scorched by the lander’s rockets during touchdown.

Nearby, InSight’s heat shield and parachutes can be seen too.

Nicolas Thomas, CaSSIS principal investigator from the University of Bern in Switzerland, said: “All of the images we’re sharing today represent some of the best from the last few months.”

It comes following a number of bizarre claims surrounding the Red Planet.

Earlier this month, conspiracy theorist claimed an “alien statue” had been spotted in a NASA photo.

Stranger still, outrageous claims have surfaced that Mars was “made to orbit at right rate by aliens” after a bombshell find.

Why Does Some Rain Fall Harder Than Other Rain? A Scientist Explains
Physicists Demonstrate a Weird Effect Where Heating Particles Causes Them to Freeze
We Just Found The Fastest Star in The Milky Way, Travelling at 8% The Speed of Light
A Broken Cable Has Smashed a Huge Hole in The Arecibo Observatory
Digital Information Threatens to Consume The Planet’s Mass, Physicist Claims