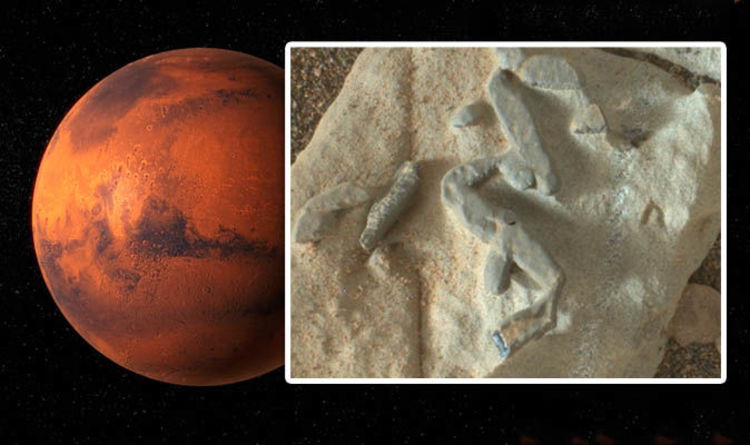 A UK based researcher has stunned the scientific community with claims NASA has withheld crucial evidence of life on the Red Planet.

Dr Barry DiGregorio, from the University of Buckingham, claims in a recent interview with the Daily Star, to have seen alien fossils on Mars.

According to Dr DiGregorio, NASA’s famous Curiosity rover stumbled upon the fossilised remains of “soft bodied creatures” which once roamed the planet in ages long forgotten.

He said: “If you look at the images more closely, the sticks merge into the host rock, this actually has features in it that are reminiscent of trace fossils.

“NASA has turned its back on trying to get the data on this.

“The order came down from NASA HQ that they should move the rover on to the next point.

“They didn’t feel it was important enough to look at, I thought that was very odd, despite the fact a gale crater was host to probably a series of lakes for billions and billions of years.”

Dr DiGregorio said it was unusual for the American space agency to abandon the site in such haste.

He added: “If you have been in this as long as I have, to have seen all the things I have seen, with NASA, I would actually say that they are avoiding looking for life.”

Life on Mars? Some scientists and conspiracists think these are fossils of ancient alien life forms

Earlier in January the expert said the twisting and branching rock formations reminded him of Ordovician trace fossils.

Meanwhile, other fossil experts agreed the formations were reminiscent of fossils left behind by burrowing creatures.


But the incredulous assertions where dismissed by NASA officials who have instead proposed a much simpler explanation for the “fossils”.

The tubular formations were asserted to be instead angular crystal growths, and not of organic origin.

Ashwin Vasavada, of NASA’s Jet Propulsion Laboratory in Pasadena, California, said the formations were likely created at some point by crystals interacting with ancient water sources on Mars.

Another plausible explanation he said, is the formations are the remnants of crystals themselves.

Mr Vasavada explained: “When we looked at these things close up, they’re linear, but they’re not tubular in the sense of being cylinders; they’re actually quite angular.

“They have kind of a square or a parallelogram sort of cross section and form at angles to each other when there’s multiple of them together.

“And all of that’s pretty reminiscent of crystalline growth.” 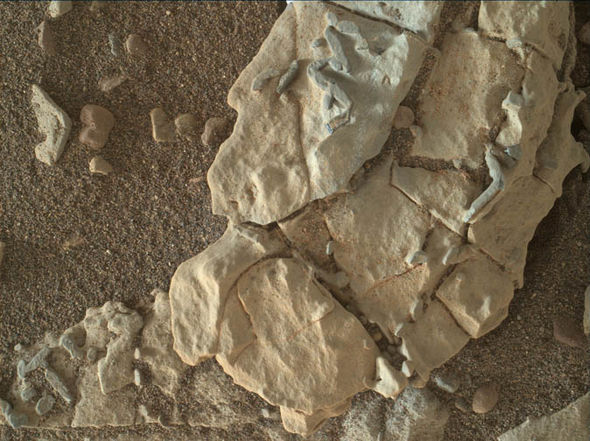 NASA claims the Curiosity photos are of crystalline structures on Mars

But Dr DiGregorio was not convinced by the explanation on offer by NASA.

“We’re talking about something that might have been equivalent to the Ordovician period on Earth.”

Today Mars is a deadly wasteland of dust with a carbon dioxide-based atmosphere. Nothing can survive there. 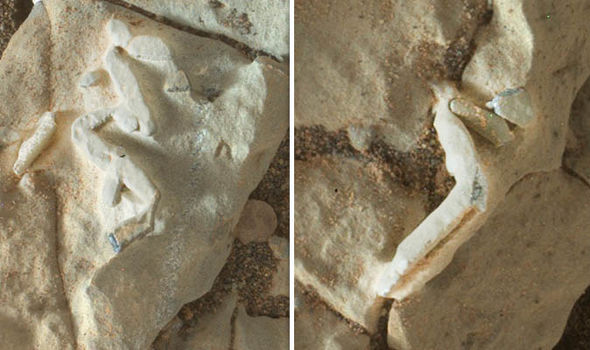 But trace evidence suggest thousands upon thousands of years ago the planet had a lush atmosphere and bountiful reserves of water, prompting many to believe it may have held life at some point.

NASA said: “Although most of the water on Mars is locked up in ice, the possibility remains that some liquid water could exist in underground aquifers. These potential reservoirs could even host life.

“This intriguing idea received a boost in 2003, when astronomers detected methane in the Martian atmosphere.

“Methane could be generated by bacteria, although it could also come from geological processes.”