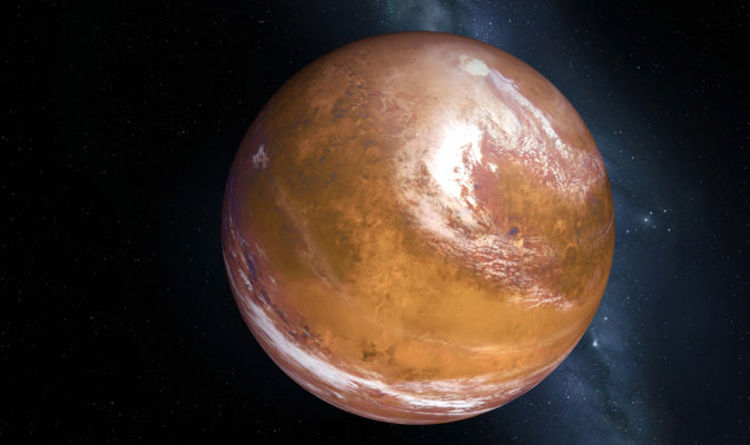 
Scientists in Spain found tiny cyanobacteria which have apparently evolved to survive in total darkness.

These tiny creatures normally use photosynthesis to convert sunlight into energy, much like plants.

An ability to live deep underground away from lethal levels of radiation and unforgiving temperatures would be a great advantage to anything living on Mars.

Dr Fernando Puente-Sancheza, of the Spanish National Centre for Biotechnology, said: “The subsurface is a good place to live on if you are on Mars.

“On the surface in Mars, there is almost no atmosphere so you get a lot of radiation that could damage life.

“If you go some metres below the surface then you are protected, it is a very stable environment.”

Researchers previously thought these microbes could survive only by absorbing the sun’s warm rays.

But the versatile bacteria have proven there are few conditions they cannot adapt to live in.

“You go to the International Space Station, and they can get the microbes up and get them down, and they survive.

“The last habitat we hadn’t seen before was the sub-surface.”

The researchers analysed the genetic sequences of the bacteria to understand exactly how the bacteria discovered in the Iberian Pyrite Belt borehole were thriving.

Dr Puente-Sancheza said: “Whenever there were large amounts of cyanobacteria in the samples, the hydrogen concentrations decreased – that could indicate the cyanobacteria are indeed consuming that hydrogen.”

The results also suggest a model for the kind of alien life forms that could once have inhabited Mars and could be living there still.

The expert said: “On Mars, the typical idea you get is that if there was ever life, it was in the past because in the past it was so much better – you had water on Mars, you had an atmosphere that would give you protection, you have volcanic activity that gave you more energy.

“What this tells us is that maybe things that were alive on the surface and were having a good time in the past there – maybe they can colonise the subsurface and maybe they are still surviving there.”

Scientists now hope these studies will inform and influence future expeditions in the hunt for extraterrestrial life.

Robot Shows It’s Possible to Swim Through The Emptiness of a Curved Universe : ScienceAlert
This Artificial Synapse Can Run a Million Times Faster Than Ones in The Human Brain : ScienceAlert
A Snake-Lover Built Robotic Legs For a Snake, and It’s Insane : ScienceAlert
Clinical Trial Restored Sight to 20 People With Corneas Made From An Unlikely Source : ScienceAlert
Many Cat Lovers Are Giving Their Cats Unwanted Affection, Study Suggests : ScienceAlert