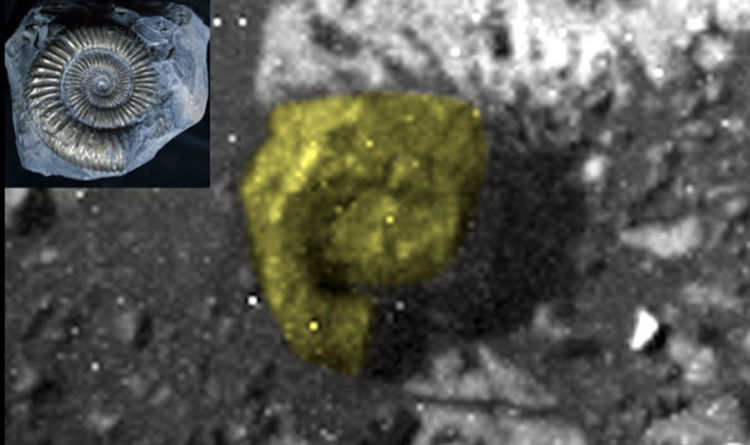 
Experts and conspiracy theorists alike have been on the hunt for any semblance of evidence that life once existed on Mars. Now one prominent alien hunter believes he has discovered the elusive evidence. The UFO hunter has been perusing through NASA images from the space agency’s Martian rover, and believes he has found a fossil.

The object in question is eerily similar to an ammonite fossil – a common fossil found on Earth from a curled up shell from an ancient sea mollusc.

Scott C Waring discovered the ‘fossil’, and wrote on his blog UFO Sightings Daily: “I noticed this object near the rover looks very similar in shape to a snail.

“I believe that since it evolved on a different planet, its shape was effected by a different evolution involving different environmental influences.

“I’m confused at why the NASA rover didn’t want to examine it more closely, since it was hovering over some rocks nearby for several days.

“It would be most interesting to have a palaeontologist take a look at the object.”

This is not the first time apparent fossils have been found on Mars.

Another recent finding was that of a large black rock which was supposedly such strong evidence of alien life that NASA was accused of misleading the public.

Mr Waring wrote on his blog: “While looking at the front page of the Mars Science Laboratory website, I noticed that they placed a photo with a huge black fossil right on the freaking front page!

“How could anyone who has any experience at ancient fossils and artefacts have even possibly have missed that?

However, sceptics and NASA would say the fossil and other similar findings are just the effects of pareidolia – a psychological phenomenon when the brain tricks the eyes into seeing familiar objects or shapes in patterns or textures such as a rock surface.

This would mean that the Martian ‘fossil’ could just be a misshapen rock.

Millions of ‘Silent Synapses’ Could Be The Key to Lifelong Learning : ScienceAlert
Earth’s Oxygen Came From an Unexpectedly Deep And Hot Source, Study Suggests : ScienceAlert
Astronomers Spot The Biggest Galaxy Ever, And The Scale Will Break Your Brain : ScienceAlert
We May Finally Know How Lightning Gets Its Zigzag Shape : ScienceAlert
Humans Keep Growing an Extra Artery in Their Arms, And This Is Why : ScienceAlert